India's Rohan Bopanna and his French partner Edouard Roger-Vasselin lost 5-7 2-6 to the Spanish second seeds in the semifinals of the USD 3,079,555 hard court tournament. 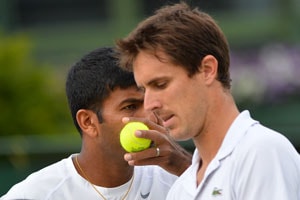 The eighth-seeded Indo-French combination lost 5-7 2-6 to the Spanish second seeds in the semifinals of the USD 3,079,555 hard court tournament.

Bopanna and Roger-Vasselin had three chances in the first set and two in the second but could not convert any.

On the other side, they dropped their serve one time in the opening set and twice in the second.

The Spanish side will now face top seeded American twins Mike and Bob Bryan, who saved a match point to advance to their 12th doubles final of the year with a 4-6 7-6(6) 10-6 win over Santiago Gonzalez and Scott Lipsky.