Roddick hangs on to beat Russell at US Open 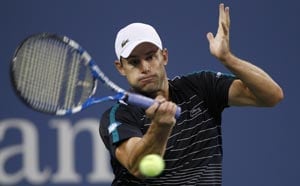 After breezing through the first two sets, Roddick began to run into trouble in the third, and then fell behind by a break in the fourth. But Roddick broke right back to even that set at 3-all.

Struggling with various injuries, former No. 1 Roddick is having a tough season, and his ranking has dropped outside the top 20 for the first time in a decade.

Russell fell to 0-7 at Flushing Meadows.

Roddick, who turned 29 on Tuesday, will face 18-year-old Jack Sock of the United States next.

Comments
Topics mentioned in this article
Tennis Tiger Woods Maria Sharapova Sania Mirza Leander Paes Andy Roddick Michael Russell US Open 2011
Get the latest Cricket news, check out the India cricket schedule, Cricket live score . Like us on Facebook or follow us on Twitter for more sports updates. You can also download the NDTV Cricket app for Android or iOS.