US Open 2022: Nick Kyrgios had an on-court meltdown after his quarterfinal exit against Karen Khachanov, as he smashed his racket repeatedly on the court. 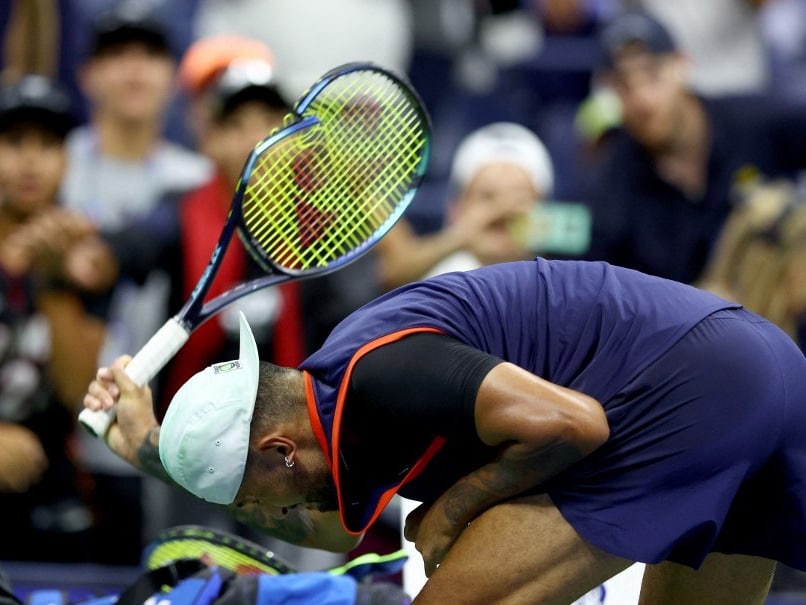 US Open 2022: Nick Kyrgios smashes his racket on the court.© AFP

Australian tennis star Nick Kyrgios is known for his fiery temperament, often losing his cool at umpires, opponents, members of the audience and even his own entourage. On Wednesday, the 27-year-old went down to Russia's Karen Khachanov in five sets in the US Open quarter-finals. After his defeat, Kyrgios was fuming and he took his frustration out on his racket, smashing it on the ground repeatedly before throwing it down with force. He ended up destroying the racket in his meltdown.

A meltdown from Nick Kyrgios after losing in the US Open quarterfinal! pic.twitter.com/hUTaihlTBF

But he wasn't done yet. Kyrgios went on to pick up another racket and hurled that to the ground as well.

"I'm obviously devastated. But all credit to Karen. He's a fighter. He's a warrior," Kyrgios said after the match.

"It's just devastating. Like, it's heartbreaking. Not just for me, but for everyone that I know that wants me to win," he added.

"I feel like I've just failed at this event right now. That's what it feels like," he said about his defeat to Khachanov.

Kyrgios had reached the final of Wimbledon earlier this year, but went down to Novak Djokovic in four sets as the Serb won his 21st Grand Slam title.

Comments
Topics mentioned in this article
US Open 2022 Nick Kyrgios Karen Khachanov Tennis
Get the latest updates on IPL Auction 2023 and check out  IPL 2023 and Live Cricket Score. Like us on Facebook or follow us on Twitter for more sports updates. You can also download the NDTV Cricket app for Android or iOS.