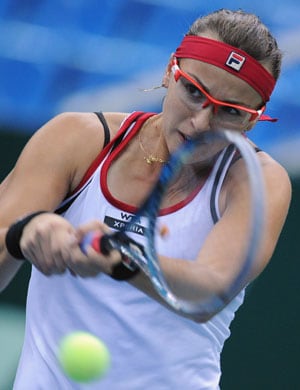 Shvedova is ranked No.28 in singles and No.19 in doubles and has won the women's doubles at Wimbledon and the US Open.

This season, she stormed into the top 30 after starting outside the top 200 and won plaudits for her charge to the quarter-finals of the French Open.

"If I get better and better in singles, maybe I'll even quit doubles, but I'm not planning to do that yet," she said.

Quitting doubles would improve her singles game by removing the need for her to concentrate on two different styles of play, she said.

Shvedova is competing in the Kremlin Cup in her home city of Moscow, where she lost to Russia's Maria Kirilenko in the second round Thursday.

The crowd opposed Shvedova because she switched allegiances to represent Kazakhstan in 2008, she said.

"A whole lot of people are maybe unhappy that I moved and because of that maybe rooted against me," she said.

"I'm a little bit sad of course that people feel like that about me, but what can I do?"

Shvedova said that the crowd was also probably strongly behind Kirilenko as the last Russian representative left in the women's draw.

She said she did not regret her move to Kazakhstan, and those of several other Russian tennis players, which she said was sparked by the poor facilities for players in Russia.

"A lot of players have moved. We didn't move because we don't love our country," she said.

"We go because of the conditions in the country. It's hard to train and there aren't few conditions to prepare well. It's necessary to move."

Shvedova represented Kazakhstan at the Olympics in London in August, where she beat Romania's Simona Halep in her first match but lost to Germany's Sabine Lisicki in the second round.

Comments
Topics mentioned in this article
Tennis Yaroslava Shvedova Rafael Nadal Sania Mirza
Get the latest Cricket news, check out the India cricket schedule, Cricket live score . Like us on Facebook or follow us on Twitter for more sports updates. You can also download the NDTV Cricket app for Android or iOS.