Caroline Wozniacki earned her first singles title of 2011, beating an error-prone Svetlana Kuznetsova of Russia to win 6-1, 6-3 in the Dubai Championships final on Sunday. 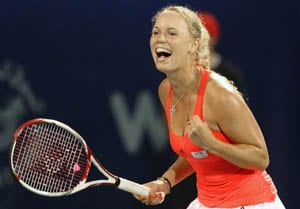 Caroline Wozniacki earned her first singles title of 2011, beating an error-prone Svetlana Kuznetsova of Russia to win 6-1, 6-3 in the Dubai Championships final on Sunday.

The Dane, who will retake the No. 1 ranking from Kim Clijsters on Monday, was never seriously threatened by the 23rd-ranked Kuznetsova. The Russian will still move up to 11th in the rankings.

Wozniacki, who didn't drop a set during the week on her way to winning her 13th career title, showed off a more aggressive style that included repeated forays to the net in the first set that helped her race to a 2-0 lead. She closed out the set by winning the final four games as Kuznetsova's game was hurt by missed volleys and erratic shots sent long and wide.

"I definitely went for my shots," Wozniacki said on court after her victory. "It's paying off now. I'm definitely playing better than I have been before."

Wozniacki again took the initiative in the second set, going up 3-1. Kuznetsova pulled a game back but then Wozniacki won the next two games, breaking the Russian to go up 5-2. Kuznetsova showed signs of a fight back, saving two match points on her way to closing the gap to 5-3 but it proved too little, too late.

Kuznetsova went up 30-0 in the next game, getting to a volley from Wozniacki and then firing a crosscourt winner past the Dane. But Wozniacki snuffed out the comeback, hitting a forehand smash to set up match point when Kuznetsova hit another forehand long to hand the Dane the win.

Comments
Topics mentioned in this article
Tennis Daniela Hantuchova Caroline Wozniacki Vera Zvonareva Anna Chakvetadze Svetlana Kuznetsova Novak Djokovic Roger Federer
Get the latest Cricket news, check out the India cricket schedule, Cricket live score . Like us on Facebook or follow us on Twitter for more sports updates. You can also download the NDTV Cricket app for Android or iOS.