Venus Williams, who won the last of her seven Grand Slam titles at Wimbledon in 2008, is back in the last-four of a Grand Slam for the first time since the 2010 US Open 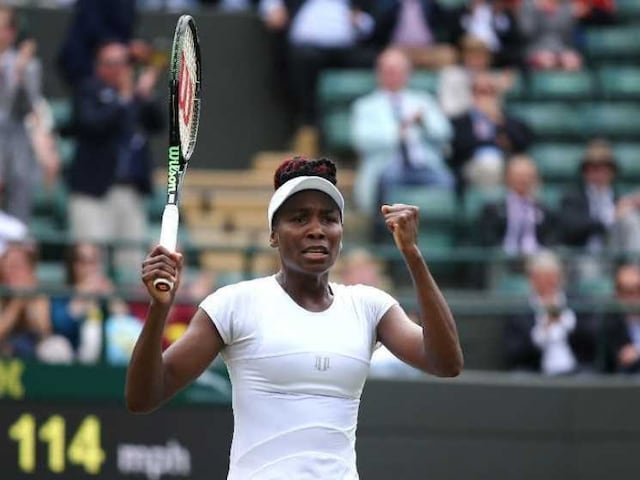 Venus Williams, 36, is the oldest women's semi-finalist at Wimbledon since Martina Navratilova in 1994.© AFP

Venus, 36, is the oldest women's semi-finalist since Martina Navratilova in 1994 as she also moved a step closer to a final showdown with her sister and defending champion Serena Williams.

Slovak 19th seed Dominika Cibulkova, who is due to get married on Saturday, meets unseeded Elena Vesnina of Russia.

Venus, who won the last of her seven Grand Slam titles at Wimbledon in 2008, is back in the last-four of a Grand Slam for the first time since the 2010 US Open.

Eight-time Wimbledon finalist Venus trails 3-2 in her five career meetings with 28-year-old Kerber, who won their only meeting on grass in the 2012 Olympics at Wimbledon.

"Oh wow, what a tough day on the court. It seemed she was going to win the tie-break but somehow I walked out with the set," Venus said.

"She was on fire, but when you can walk to the net as the winner that's the dream.

"I love playing the game. When you are winning matches it makes it that much sweeter.

"You can't always have these big moments. I guess if you are Serena Williams it happens a lot, but for Venus Williams this is an awesome day."

The first set tiebreak was key for Venus on Tuesday as she over-turned a 2/5 deficit before Shvedova's game fell apart in th second.

Kerber, meanwhile, is now in sight of becoming the new world number one -- although she needs to win the title while seeing Serena fail to make the semi-finals.

"I think we are both really good returners. It's always tough to play against Simona. I won the last point and that's what counts," said the German left-hander.

Kerber now has 33 match wins in 2016, joint-best with Cibulkova.

"I have had a great year so far. I think I am playing my best tennis. Hopefully I can play a few more matches here," she said

The 28-year-old Kerber, who also made the semi-finals in 2012, came out on top in a big-hitting battle with Halep, who was a semi-finalist in 2014.

The first set alone saw nine breaks of serve in 12 games with Kerber squandering leads of 3-1 and 5-3 before her Romanian opponent double-faulted on set point.

Kerber was 4-2 and 5-3 in front in the second before the tenacious Halep fought back to reach the tiebreak in a set which featured four more breaks.

But Kerber dominated the tiebreak, going to match point when Halep was bamboozled by a net cord and then taking victory off a backhand error.

Comments
Topics mentioned in this article
Venus Williams Yaroslava Shvedova Angelique Kerber Simona Halep Serena Williams Tennis
Get the latest Cricket news, check out the India cricket schedule, Cricket live score . Like us on Facebook or follow us on Twitter for more sports updates. You can also download the NDTV Cricket app for Android or iOS.