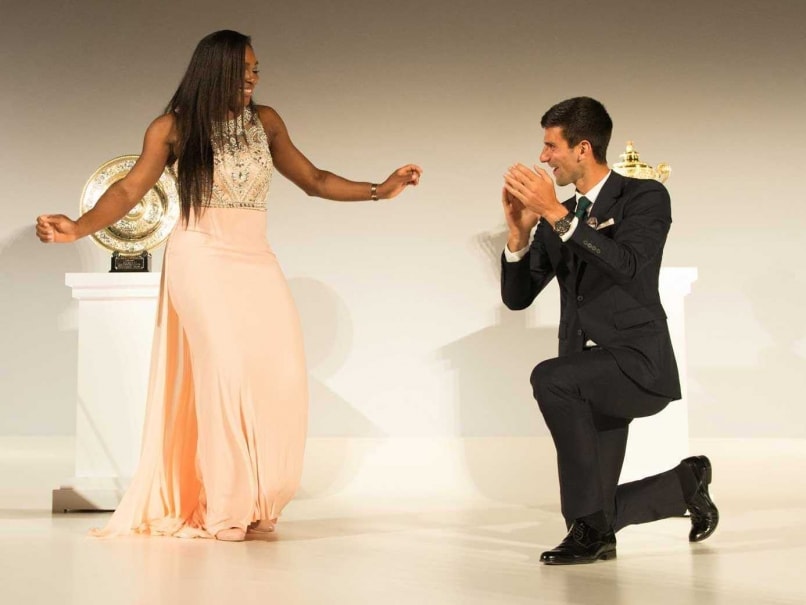 Serena Williams has said that she will not suffer the fate as Novak Djokovic at Wimbledon.© AFP

Serena Williams has warned her Wimbledon rivals she won't suffer the same humiliation as Novak Djokovic as the defending champion steps up her bid for a record-equalling 22nd major title.

Williams was as shocked as the rest of the tennis world by Djokovic's third round exit against Sam Querrey on Saturday, but she is using her fellow world number one's demise as a valuable lesson not to underestimate any opponent.

The 34-year-old put that plan into practice as she routed Germany's Annika Beck 6-3, 6-0 in 51 minutes on Centre Court on Sunday, winning 11 of the last 12 games to earn her 300th Grand Slam match victory.

Serena was so dominant that in the second set she lost only four points, and none on her serve, prompting former Wimbledon champion Jana Novotna to describe the American as "absolutely flawless".

And Williams, who hasn't won a major since last year's Wimbledon, revealed fear of enduring a humbling loss like Djokovic is keeping her focused ahead of Monday's last 16 clash with Russian 13th seed Svetlana Kuznetsova.

"Every time I step out on the court, if I don't win, it's major national news. But if I do win, it's just like a small tag in the corner," said Williams, who is hoping to tie Steffi Graf's Open era record of 22 Grand Slam triumphs.

"I think there is only two people that you can say that about out of all the athletes.

"I thought Novak would come back. I was surprised he didn't, actually.

"It is what it is. I don't look at it as a burden. It's really awesome to be in that position."

Serena happy to work on Sunday after blasting past Beck: https://t.co/DpQRPczc9t #Wimbledon pic.twitter.com/kJhd5fFXPw

After being forced to take a starring role in Wimbledon's first middle Sunday of play since 2004, Williams was relieved to make short work of Beck, giving her extra time to rest before attempting to secure a 10th victory in 13 meetings with her good friend Kuznetsova.

"It gives me a lot of confidence. I know what it takes to win these tournaments. It's just about doing it now," the six-time Wimbledon champion said.

Kuznetsova shrugged off a controversial code violation for coaching to clinch a gruelling 6-7 (1/7), 6-2, 8-6 victory over Sloane Stephens.

Inspired by Querrey's heroics against Djokovic, the 31-year-old, who won the US Open in 2004 and the French Open in 2009, hopes to emulate her victory over Williams in Miami earlier this year.

"We're all humans and it shows one more time that you can lose, you're not perfect," Kuznetsova said.

"Definitely she will be favourite but upsets happen. Nobody is unbeatable."

Serena's sister Venus Williams, the oldest woman left in the tournament, will be aiming for her first Wimbledon quarter-final since 2010 when she takes on Spanish 12th seed Carla Suarez Navarro.

Venus, 36, won the last of her seven Grand Slam titles when she lifted the Wimbledon trophy for a fifth time in 2008 and hasn't made the semi-finals of a major since the 2010 US Open.

Polish third seed Agnieszka Radwanska, beaten by Serena in the 2012 Wimbledon final, will continue her quest for a first major title against Slovakia's Dominika Cibulkova.

Russia's Elena Vesnina faces compatriot and doubles partner Ekaterina Makarova, who was a bridesmaid at her wedding last year.

Comments
Topics mentioned in this article
Novak Djokovic Serena Williams Elena Vesnina Tennis
Get the latest updates on IPL 2020, check out the IPL Schedule for 2020 and Indian Premier League (IPL) Cricket live score . Like us on Facebook or follow us on Twitter for more sports updates. You can also download the NDTV Cricket app for Android or iOS.