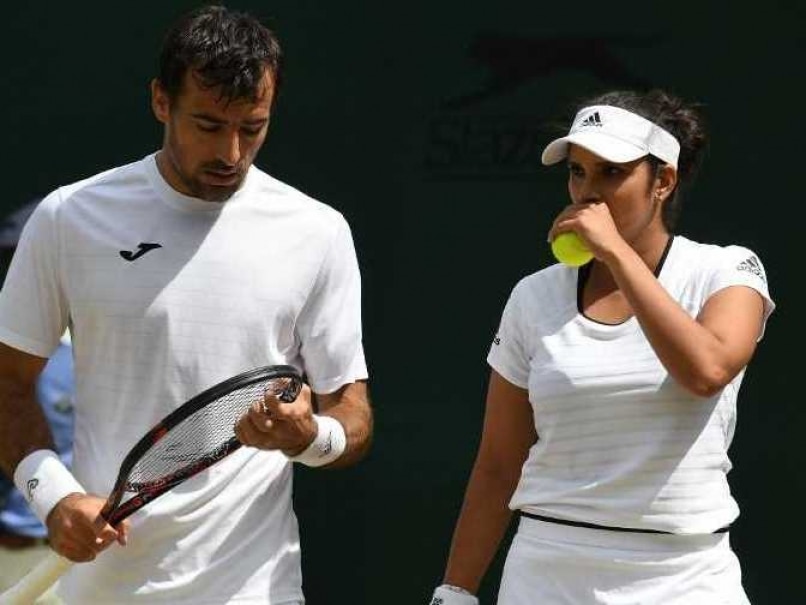 Sania Mirza and Ivan Dodig during their Wimbledon mixed doubles second round match against Neal Skupski and Anna Smith on Tuesday.© AFP

Top seeded Indo-Croatian pair of Sania Mirza and Ivan Dodig crashed out of the mixed doubles event in the second round while Sania's compatriot Rohan Bopanna and his Russian partner Anastasia Rodionova also exited the Wimbledon 2016 after losing their third round match.

Sania and Dodig lost to unseeded British duo of Neal Skupski and Anna Smith 6-4 3-6 5-7 in a second round match that lasted over two hours.

Bopanna and Rodionova, 13th seeds, went down 6-7(5/7),3-6 to Juan-Sebastian Cabal and Mariana Duque-Marino.

The Mirza-Dodig pair paid for their profligacy as they bungled on multiple match points in the final set before the unheralded British came out trumps.

Both pairs traded a couple of breaks in the first set before the top seeds got a third break, which enabled them to close the set at 6-4.

Sania and Dodig looked on course for an easy victory but Neal and Anna came back strongly, getting a break and winning the second set 6-3.

The fancied Indo-Croatian pair had problem with their second serve and their success rate was a mere 38 per cent. In the final set, Mirza-Dodig pair were 5-3 up serving for the match at 40-30.

However, the British kept on fighting as they saved another match point before winning a break to make it 4-5.

While serving to stay in the match, the Britons again were standing at the cusp of defeat with Mirza-Dodig getting another chance to seal the issue, but they failed. The 11th game saw the locals break the serve of the top seeds and then serve out the match in the 12th game.

In the girls' event, India's Karman Kaur Thandi's poor show at the junior Grand Slams continued as Mariam Bolkvadze of Georgia won her second round match 4-6 6-2 6-2 in a little over two hours. Thandi had previously lost in the first round at the French Open.

Comments
Topics mentioned in this article
Sania Mirza Ivan Dodig Neal Skupski Anna Smith Tennis
Get the latest updates on IPL Auction 2023 and check out  IPL 2023 and Live Cricket Score. Like us on Facebook or follow us on Twitter for more sports updates. You can also download the NDTV Cricket app for Android or iOS.