Wimbledon: Nick Kyrgios Enters Second Round, But Gets Warned For Bad Language 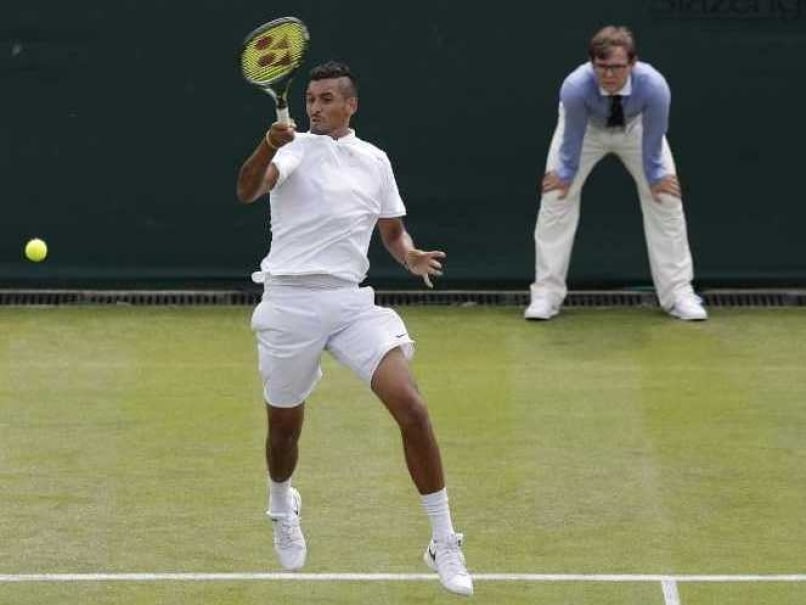 Australia's Nick Kyrgios returns against Czech Republic's Radek Stepanek during their men's singles first round match of 2016 Wimbledon Championships at The All England Lawn Tennis Club in Wimbledon on Tuesday.© AFP

Nick Kyrgioswas back in trouble on his return to Wimbledon as the Australian rowed with umpire Mohamed Lahyani and told his entourage to get out during a stormy 6-4, 6-3, 6-7 (9/11), 6-1 win over Czech veteran Radek Stepanek on Tuesday.

Kyrgios has earned a reputation as one of the most volatile players on the men's tour after a series of distasteful antics, including briefly appearing to stop trying during his Wimbledon defeat against Richard Gasquet last year.

The temperamental 21-year-old, who was hit with a USD 2,000 fine for swearing during the same last 16 clash with Gasquet, lost his cool yet again on his first return to the All England Club since that meltdown 12 months ago.

He was warned for bad language by Lahyani following an audible rant that included telling his support team to stop watching him after he lost the third set.

Despite his latest petulant display, Kyrgios insisted he provided great entertainment for fans.

"The crowd likes the way I play here, I entertain. I'm comfortable here and they know the tennis I bring every day," he said.

Kyrgios has struggled to stay out of trouble through his career, so there was plenty of attention on the world number 18 when he strolled onto Court Two -- also the venue for the Gasquet incidents.

He didn't take long to live up to his reputation when he began complaining and audibly groaned "diabolical call" after being told to replay one point in the first set.

Stepanek, the world number 129, is also known as a difficult personality on court and he apparently recognised a kindred spirit in Kyrgios, offering to help him with his problems this year.

On this evidence, Stepanek's advice may not have sunk in yet.

Kyrgios was on course for a routine win as he overwhelmed Stepanek with a barrage of winners including a brilliant between-the-legs lob.

But he was broken when serving for the match and then failed to take a match point in the third set tie-break, prompting a stream of invective that ended with the Australian telling his entourage to leave.

"I'm serious, get out, get out," he ranted before being warned for bad language by Lahyani.

Kyrgios continued to complain to Lahyani throughout the fourth set.

"You're telling me that every single person who has said that word in this chair has got a code violation, in the history of tennis," he said.

But, despite the histrionics, Kyrgios was playing some superb tennis and he surged to victory in emphatic fashion.

The 15th seed, hoping to emulate his run to the quarter-finals in 2014, could be facing another financial penalty from All England Club chiefs before he plays German wildcard Dustin Brown for a place in the last 32.

Comments
Topics mentioned in this article
Nick Kyrgios Radek Stepanek Richard Gasquet Tennis
Get the latest updates on India vs South Africa and check out  Schedule, Results and Live Score. Like us on Facebook or follow us on Twitter for more sports updates. You can also download the NDTV Cricket app for Android or iOS.