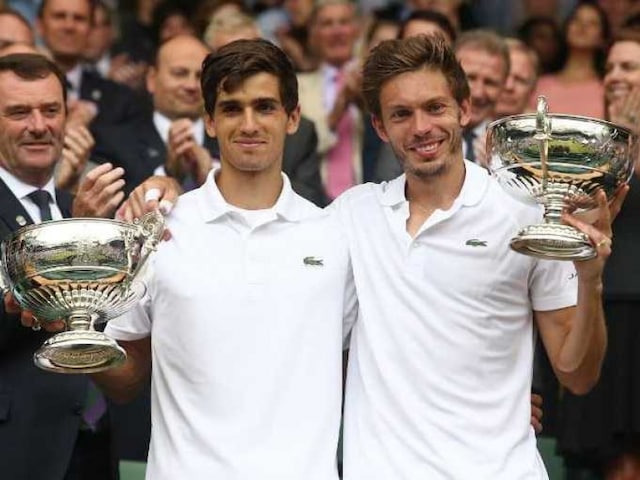 France's Pierre-Hughes Herbert (left) and Nicolas Mahut pose with the winners trophies after their Wimbledon 2016 men's doubles finals match at the All England Club on Saturday.© AFP

The victory gives Mahut a happier memory from the grass-court tournament where he lost the longest match in tennis history, 70-68 in the fifth set against John Isner in the first round of singles in 2010.

"We talk a lot about this match already. I'm very proud of it," Mahut said, referring to the contest that lasted more than 11 hours, spread over three days. "But now it's something different. Now I can come in the press conference as a Wimbledon champion. It's great."

This is the second major title together for the top-seeded team of Mahut and Herbert, who won the U.S. Open last year.

They're only the second pair of Frenchmen to earn the doubles trophy at the All England Club in the Open era, which began in 1968. Arnaud Clement and Michael Llodra won Wimbledon in 2007.

Mahut knows Benneteau and Roger-Vasselin rather well, having won ATP doubles titles with each of them in the past. Mahut and Benneteau even had success together as teens, collecting seven junior doubles titles in 1999.

Comments
Topics mentioned in this article
Nicolas Mahut Pierre-Hugues Herbert Julien Benneteau Edouard Roger-Vasselin Tennis
Get the latest Cricket news, check out the India cricket schedule, Cricket live score . Like us on Facebook or follow us on Twitter for more sports updates. You can also download the NDTV Cricket app for Android or iOS.