When Tennis' Big Guys Become 'Too Big' for Just a Handshake

Instead of wanting to get over a loss and head straight to the net for a customary handshake, Israel's Dudi Sela pulled out a plastic chair from the side of the court, stood on it and gave a huge midget hug to the toweringly tall Ivo Karlovic, who has recently gained an inch to be 6'11. 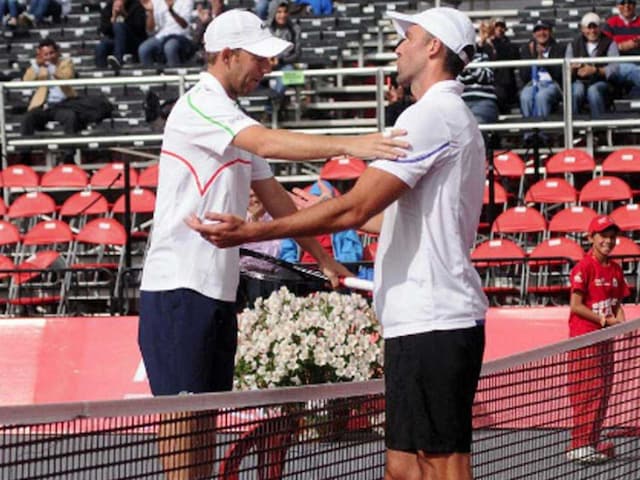 This photo that shows Dudi Sela hugging Ivo Karlovic while standing on a chair was tweeted by @ESPNSteinLine.© Twitter

After 5'9 Dudi Sela lost his second-round match to 6'11 Ivo Karlovic in straight sets at the Claro Open in Colombia on Thursday, the exchange at the net shortly afterwards wasn't one you would normally see in tennis.

Instead of wanting to get over the loss and head straight to the net for a customary handshake, Sela pulled out a plastic chair from the side of the court, stood on it and gave a huge midget hug to the toweringly tall Karlovic, who has recently gained an inch to be 6'11. Sports is not only about wins and losses. There can be fun in defeat too.

"After I won, I was going to the net to have a handshake and then I look at him and he's going back to get a chair," Karlovic told the ATP website.

Video of the Dudi Sela- Ivo Karlovic handshake and hug at the net. http://t.co/FLl8M2eDbk Via @ClaroOpenCol #tennis

"I didn't know what he was going to do and then he arrives and he gives me a hug, which was unbelievable and hilarious. Obviously he needed a hug, so I hugged him back. He's a really nice guy and I like him a lot. It was funny," added Karlovic.

Sela may have lost a match to the tall Croatian for the second consecutive time in just two weeks but he said the two were great friends and that he always wanted to hug Karlovic.

"I saw the chair and I thought it would be nice to finish the match like this with a hug, so the crowd will see it's okay," said Sela, who also pointed out that he was shorter than his opponent despite the chair.

Sela probably did not want to look like a midget to Karlovic in front of the cameras but it sure made for an extremely funny episode.

Comments
Topics mentioned in this article
Ivo Karlovic Dudi Sela Tennis
Get the latest Cricket news, check out the India cricket schedule, Cricket live score . Like us on Facebook or follow us on Twitter for more sports updates. You can also download the NDTV Cricket app for Android or iOS.