American Varvara Lepchenko won in her Fed Cup singles debut to lift the U.S. team to a 1-1 tie against Italy on Saturday, after Sara Errani beat Jamie Hampton 6-2, 6-1. 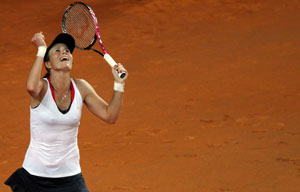 American Varvara Lepchenko won in her Fed Cup singles debut to lift the U.S. team to a 1-1 tie against Italy on Saturday, after Sara Errani beat Jamie Hampton 6-2, 6-1.

Lepchenko rallied past Roberta Vinci 2-6, 6-4, 7-5 after the Italian struggled with a leg cramp in the final set, which featured seven breaks of serve. She had treatment on her left thigh and rallied from 5-1 down in the third to tie it 5-5.

Then Lepchenko broke back and served out the match.

"I really lost my focus and got a bit distracted, which happens a lot to a lot of players," Lepchenko said. "I just kept on fighting, said to myself it's not the end of the match, you can still win it."

The doubles on Sunday will feature Melanie Oudin and Liezel Huber against Nastassja Burnett and Karin Knapp. Lepchenko will play Errani in reverse singles.

Lepchenko, who is originally from Uzbekistan, moved to the U.S. in 2001 and claimed political asylum. She officially became a U.S. citizen in 2011 and was part of the team at the London Olympics.

"I feel amazing to be part of this team, to have so much spiritual support behind me," Lepchenko said. "There's this feeling that I can't let my team down, so I try even harder, more than if I was playing for myself. The team is really important for me.

"I wasn't that nervous, because of my experience in the Olympics, where I was super nervous. I told myself I wasn't going to let emotions ruin my chances here. I was a bit stiff at the beginning, but then I got into it."

The seventh-ranked Errani needed just over an hour to beat the 64th-ranked Hampton.

With Serena and Venus Williams and Sloane Stephens injured, Hampton and Lepchenko made their Fed Cup singles debuts. Veterans Francesca Schiavone and Flavia Pennetta, who have struggled lately, were left off Italy's squad.

"We're going to try our hearts out tomorrow," U.S. captain Mary Joe Fernandez said. "I'm really proud of how (Lepchenko) approached the match and how disciplined she was. It's not easy the first time, especially when you're playing with a crowd from another country, and she did a good job blocking it out.

Italy will hope Vinci recovers for reverse singles on Sunday.

"I hope it's just a bit of cramp, but they're treating her," Italy captain Corrado Barazzutti said. "Roberta made a really great effort. She was injured, but she played the last few games with all of her heart."

Comments
Topics mentioned in this article
Tennis Roberta Vinci Nadia Petrova Maria Sharapova Venus Williams Anastasia Pavlyuchenkova Varvara Lepchenko
Get the latest updates on Fifa Worldcup 2022 and check out  Fifa World Cup Schedule, Stats and Live Cricket Score. Like us on Facebook or follow us on Twitter for more sports updates. You can also download the NDTV Cricket app for Android or iOS.