US Open: Serena Williams Races Into 4th Round, Andy Murray Labours to Win

World No.1 Serena Williams dominated Sweden's Johanna Larsson 6-2, 6-1 in the US Open third round match to surpass Martina Navratilova for most Grand Slam wins by a woman with 307 victories 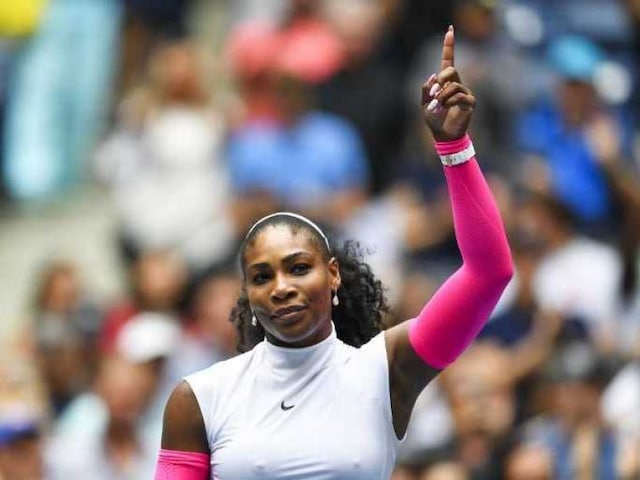 Serena Williams celebrates after defeating Johanna Larsson of Sweden in the 2016 US Open women's singles.© AFP

Serena Williams sped past another milestone on Saturday en route to the US Open fourth round as men's contenders Andy Murray and Stan Wawrinka clawed their way into the last 16.

World number one Williams dominated Sweden's Johanna Larsson 6-2, 6-1 to surpass Martina Navratilova for most Grand Slam wins by a woman with 307.

Not only has she surpassed Navratilova, she matched Roger Federer's mark for men.

"To be up there with both men and women is something that's super-rare, and it actually feels good," said Williams, who said she was "really excited" to reach 307.

"Obviously I want to keep that number going higher," added Williams, who will get her chance when she takes on Kazakhstan's Yaroslava Shvedova for a quarter-final berth.

In the one hour it took to subdue Larsson, Williams appeared untroubled by the shoulder injury that has slowed her since her Wimbledon triumph.

"It definitely feels solid," she said. "I'm doing a lot of work on it so I can keep it in this position."

While Williams encountered little resistance as she moved a step closer to an Open Era record of 23 Grand Slam titles -- and Margaret Court's all-time record of 24 -- it was another story for the top men's seeds in action.

The 31-year-old third seed saved the match point at 5/6 in the fourth set tiebreaker, breaking the will of his 64th-ranked opponent.

"I was lucky to get through, saving match point," said Wawrinka after reaching the last 16 in Flushing Meadows for a fifth straight year.

Murray's troubles against Paolo Lorenzi were much of his own making as he allowed the Italian journeyman to make him look ordinary through two sets before pulling himself together to win 7-6 (7/4), 5-7, 6-2, 6-3.

"I had to stop rushing," said Murray, who arrived at the year's final Grand Slam off victories at Wimbledon and the Rio Olympics and may have expected less from Lorenzi, the 34-year-old who only won a first ATP title in July.

"I was making a lot of unforced errors and (Lorenzi) is very solid, and doesn't give you cheap points," Murray said. "I was looking for those cheap points too often."

Wawrinka next faces Ukrainian Illya Marchenko for a place in the quarterfinal. Marchenko advanced after Nick Krygios retired after suffering a hip injury. Marchenko was leading 4-6, 6-4, 6-1 when Kyrgios quit.

Nishikori, who has dropped a set in each of his matches so far, next faces big-serving Croatian Ivo Karlovic, who beat US qualifier Jared Donaldson.

He next faces eighth-seeded Austrian Dominic Thiem, who celebrated his 23rd birthday with a 1-6, 6-4, 6-4, 7-5 victory over Pablo Carreno Busta of Spain.

Hungarian Timea Babos put a scare into Romanian fifth seed Simona Halep, surging back in the second set and taking a 3-1 lead in the third before falling 6-1, 2-6, 6-4.

Halep, who fell in the semi-finals to eventual champion Flavia Pennetta last year, will play Spain's Carla Suarez Navarro for place in the quarter-finals.

Sixth seed Venus Williams, whose seven Grand Slam titles include US Open crowns in 2000 and 2001, coasted into the round of 16 with a 6-1, 6-2 win over German Laura Siegemund, setting up a meeting with 10th-seeded Karolina Pliskova, a 6-2, 6-4 winner over Anastasia Pavlyuchenkova.

Comments
Topics mentioned in this article
Serena Williams Andy Murray Johanna Larsson Stanislas Wawrinka Kei Nishikori Daniel Evans Paolo Lorenzi Nicolas Mahut Tennis
Get the latest updates on IPL 2020, check out the IPL Schedule for 2020 and Indian Premier League (IPL) Cricket live score . Like us on Facebook or follow us on Twitter for more sports updates. You can also download the NDTV Cricket app for Android or iOS.