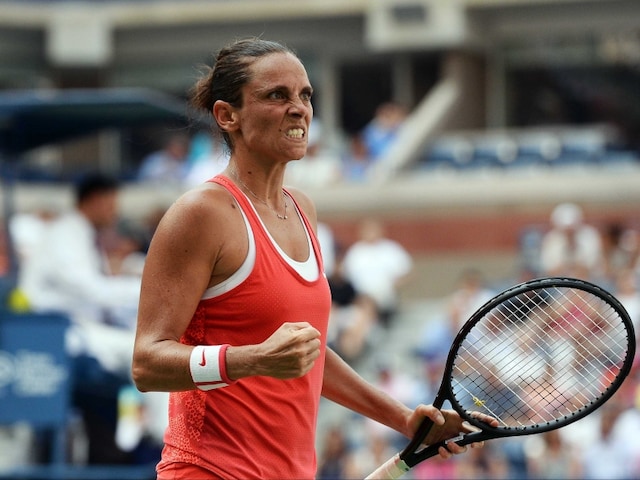 Roberta Vinci has entered the women's singles third round at US Open.© AFP

Roberta Vinci, the 2015 runner-up, and two-time Wimbledon champion Petra Kvitova booked US Open third round spots Wednesday as Novak Djokovic and Rafael Nadal prepared for the latest tests of their battle-scarred seasons.

The 33-year-old, playing at Flushing Meadows for the 14th time, goes on to face either Yulia Putintseva of Kazakhstan or Germany's Carina Witthoeft.

Kvitova, the 14th seeded Czech who recorded her best performance in New York 12 months ago when she made the last-eight, beat Turkey's Cagla Buyukakcay 7-6 (7/2), 6-3.

Kvitova was in her trademark all-or-nothing mood, mixing up 31 winners with 30 unforced errors against her 26-year-old opponent who was the first Turkish woman to play in the main draw at the tournament.

Up next for Kvitova is Ukrainian 22nd seed Elina Svitolina who put out Lauren Davis of the United States 6-1, 4-6, 6-3.

Later Wednesday, defending champion and world number one Djokovic, who needed treatment on a right upper arm injury during his laboured four-set win over Poland's Jerzy Janowicz on Monday, faces Jiri Vesely of the Czech Republic.

Vesely inflicted a rare defeat on the Serb when he triumphed on clay at Monte Carlo in April.

"Different surface, different circumstances, best-of-five. But still, Vesely deserves respect," said Djokovic, the 2011 and 2015 champion in New York and looking for a third major of the year.

"He has a big game, big serve, big forehand, and moves well for his size. So let's see. Conditions are quite suitable to my style of the game. Hopefully I'll be able to slow his serve down a little bit and then take it from there."

Spanish fourth seed Nadal, the 2010 and 2013 champion, takes a 7-1 career record over Italy's Andreas Seppi into their night time clash.

Seppi, ranked at 87, has never got beyond the third round in New York but he is a former top 20 player who knocked Roger Federer out of the Australian Open two years ago.

Like Djokovic, Nadal is suffering the after-effects of injury after a serious problem with his left wrist sidelined him from midway through the French Open until the Rio Olympics.

Muguruza needed three sets to see off Belgian qualifier Elise Mertens in a first round tie which also saw her need a medical timeout after suffering heat exhaustion.

Comments
Topics mentioned in this article
Petra Kvitova Roberta Vinci Rafael Nadal Novak Djokovic Tennis
Get the latest Cricket news, check out the India cricket schedule, Cricket live score . Like us on Facebook or follow us on Twitter for more sports updates. You can also download the NDTV Cricket app for Android or iOS.