US Open champion Stosur out of China Open

US Open champion Samantha Stosur was knocked out of the China Open on Tuesday in another upset at the tournament following shock defeats for the women's Wimbledon and French Open champions. 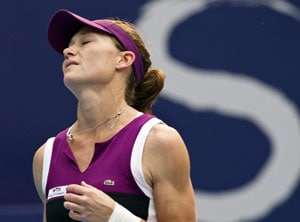 US Open champion Samantha Stosur was knocked out of the China Open on Tuesday in another upset at the tournament following shock defeats for the women's Wimbledon and French Open champions.

Stosur was beaten in her opener last week in Tokyo as she played her first match since beating Serena Williams in last month's US Open final.

Kirilenko broke in the final game to claim the victory, with Stosur saving only one of six break points in a match lasting more than two hours.

Tsonga fired down nine aces and broke Dimitrov twice in their battle lasting just under two hours, beating the Bulgarian for the third time this season.

"It was difficult to play Grigor because he's a really good player," said Tsonga. "For a first round, it was not easy.

"I didn't move really well, I didn't hit the ball really good, but I was on the court with my head and I did it. So I'm really happy to go through this one."

Russian Mikhail Youzhny, returning after a back injury, upset Spanish fourth seed Nicolas Almagro 6-3, 6-2 while China will have a player in the second round after Zhang Ze beat Li Zhe 6-1, 6-3.

Comments
Topics mentioned in this article
Tennis Leander Paes Maria Sharapova Sania Mirza Tiger Woods Samantha Stosur
Get the latest updates on IPL 2020, check out the IPL Schedule for 2020 and Indian Premier League (IPL) Cricket live score . Like us on Facebook or follow us on Twitter for more sports updates. You can also download the NDTV Cricket app for Android or iOS.