Three years after quitting tennis due to depression and injuries, Anastasija Sevastova on Sunday became the first Latvian woman to reach a Grand Slam quarter-final in 22 years 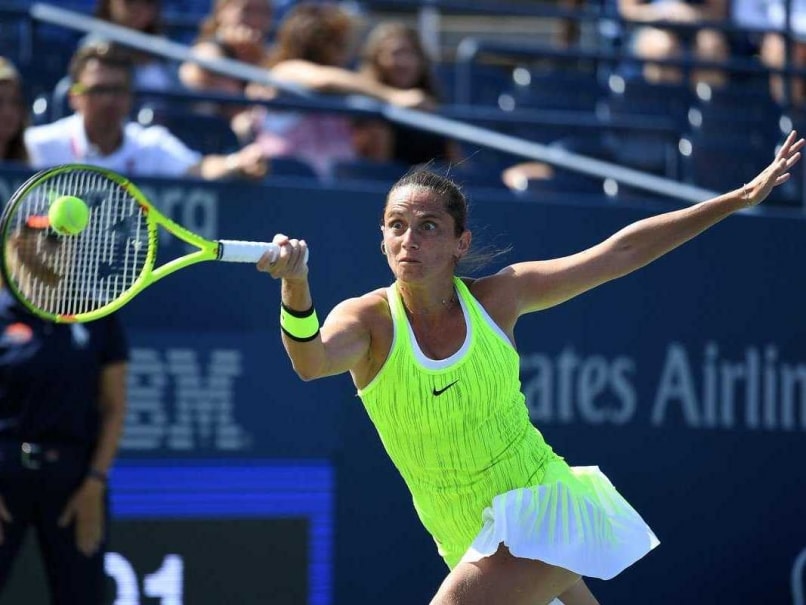 Roberta Vinci is through to her fourth quarterfinal at the US Open. (Image courtesy US Open/Twitter)© Twitter

Anastasija Sevastova, who quit tennis suffering from depression and injury in 2013, on Sunday became the first Latvian woman in 22 years to reach a Grand Slam quarter-final.

The 26-year-old world number 48 defeated Britain's 13th seed Johanna Konta, 6-4, 7-5 and goes on to face either Madison Keys of the United States or two-time runner-up Caroline Wozniacki for a place in the US Open semi-finals.

Sevastova knocked out French Open champion and third seed Garbine Muguruza in the second round and she built on that victory on Arthur Ashe Stadium in a last 16 tie which featured 12 breaks of serve.

The Briton was undone by 34 unforced errors.

Larisa Savchenko was the last Latvian woman to make the quarter-finals of a Slam at Wimbledon in 1994.

Sevastova had not won a match in New York since 2010 before this year and with her career unravelling she quit in May 2013 to study leisure management instead.

She returned to the sport in January 2015 and that decision has been fully vindicated by her stunning run to the last-eight in New York.

"I had a lot of injuries. I was depressed and it just wasn't fun anymore. But now I'm back," said Sevastova.

Konta, bidding to become the first British woman in the quarter-finals in New York since Jo Durie in 1983, never fully recovered from a poor start.

A semi-finalist at the Australian Open in January, the 25-year-old was 3-0 down in the first set and 4-1 behind in the second.

She managed to save a match point in the ninth game of the second set but Sevastova held her nerve to secure victory after 1 hour and 42 minutes,

"It was so tough to play her," said the Latvian. "But even though I had match point, I knew that with the sun at one end and the shade at the other I'd get another chance to break her.

"I just told myself to fight and fight."

Italian seventh seed and 2015 runner-up Roberta Vinci reached the quarter-finals for the fourth time with a 7-6 (7/5), 6-2 win over Lesia Tsurenko of Ukraine.

Vinci, 33, will face either second seeded Angelique Kerber of Germany or Petra Kvitova of the Czech Republic for a place in the semi-finals.

"I love to play here. The atmosphere, the crowd, everything is great," said Vinci who knocked out Serena Williams in the semi-finals in 2015 before losing the final to compatriot Flavia Pennetta.

"Lesia is a great player. I was a little tired towards the end and I had some physical problems."

Comments
Topics mentioned in this article
Tennis Anastasija Sevastova Roberta Vinci
Get the latest updates on India vs Australia Series, check out the India vs Australia Schedule for 2020-21 and Ind vs Aus live score . Like us on Facebook or follow us on Twitter for more sports updates. You can also download the NDTV Cricket app for Android or iOS.