Agnieszka Radwanska, the champion in Montreal in the run-up to the US Open, had also lost to Chinese player Shuai Peng at the same stage in New York in 2010. 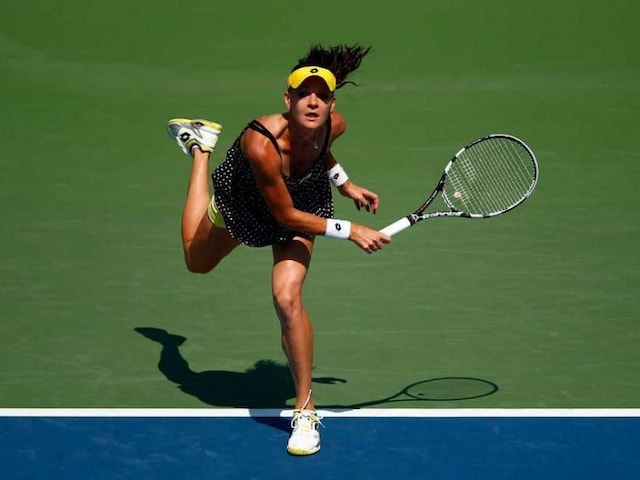 Agnieszka Radwanska of Poland serves against Shuai Peng of China Day Three of the 2014 US Open at the USTA Billie Jean King National Tennis Center on August 27, 2014 in the Flushing neighborhood of the Queens borough of New York City.© AFP
New York:

China's Peng Shuai put a stop to Agnieszka Radwanska's bid to reverse her US Open fortunes on Wednesday, toppling the fourth seed in three sets to reach the third round.

Poland's Radwanska, a former Wimbledon finalist who counts this year's Australian Open among two other Grand Slam semi-final appearances, had hoped to make it past the fourth round at Flushing Meadows in her ninth attempt.

But the 39th-ranked Peng had other ideas, breaking Radwanska three times en route to a victory sealed with a backhand winner on her third match point -- her 28th winner of the contest.

"She's tough to play," said Peng, who beat Radwanska at the same stage of the US Open in 2010.

Peng thought that coincidence might be a lucky talisman, but her biggest memory of playing Radwanska was a 2011 Australian Open loss in which she squandered two match points.

"I kept running, I fought. It was amazing. I will try to keep going," Peng said.

Radwanska, meanwhile, couldn't put her finger on her US Open trouble.

"I really want to know the answer, then maybe I will find a way to play better here and just try another way to be in the second week," she said.

Fifth-seeded Sharapova, who lifted a fifth career Grand Slam trophy at Roland Garros, was to take on Alexandra Dulgheru, the Romanian world number 95.

The biggest names of the men's field -- Novak Djokovic, Roger Federer and Andy Murray also had Wednesday off.

Australian Open winner Stan Wawrinka, the third seed from Switzerland, headlined the night session, taking on Brazil's Thomaz Bellucci in one of two men's second-round matches on the slate.

That major breakthrough was followed by a first-round exit at the French Open and a first quarter-final appearance at Wimbledon.

The 33-year-old Hewitt, who has had five surgeries in five years to keep his career going, had early breaks in both the second and third sets, but couldn't deny Berdych a 100th career Grand Slam match win.

Berdych became the ninth active men's player to reach the milestone -- an exclusive club that naturally includes Hewitt himself.

Croatia's 14th seed Marin Cilic, who reached his first Grand Slam quarter-final at Wimbledon, reached the second round with a truncated victory over Cypriot Marcos Baghdatis, the 2006 Australian Open finalist who was trailing 6-3, 3-1 in their match when he retired.

Spanish 19th seed Feliciano Lopez advanced when Croatian Ivan Dodig retired with their match knotted a 1-1 in the fifth set.

Dodig also retired at both the Australian and French Opens, and was a no-show at Wimbledon due to injury.

Seventh-seeded Bulgarian Grigor Dimitrov, trying to win his first US Open match after first-round exits the past three years, takes on US wildcard Ryan Harrison.

Comments
Topics mentioned in this article
Agnieszka Radwanska Shuai Peng Tennis
Get the latest Cricket news, check out the India cricket schedule, Cricket live score . Like us on Facebook or follow us on Twitter for more sports updates. You can also download the NDTV Cricket app for Android or iOS.