US Open 2015 Champion Flavia Pennetta Saves Her Best for Last 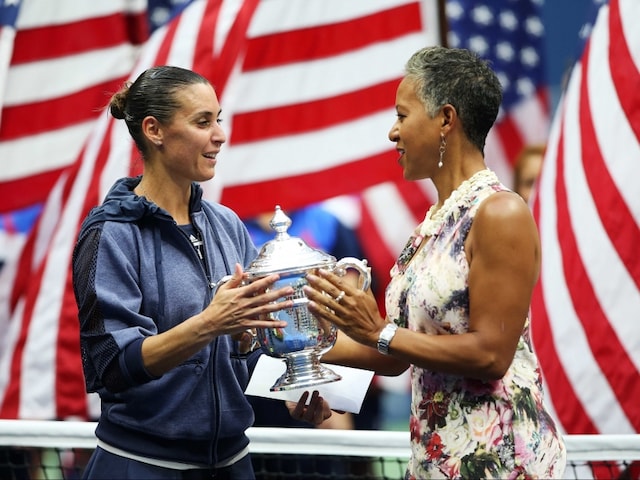 Flavia Pennetta said she will play to the end of the year, including events at Wuhan and Beijing and the WTA Finals if she qualifies.© AFP
New York:

Knowing every match could be her Grand Slam farewell, Flavia Pennetta relaxed and played some of her greatest tennis to win the US Open and capture her first major title.

"With this winning today, my life is perfect," Pennetta said.

"To play like this and finish like this, it's amazing. I'm so happy and so proud of myself. I couldn't finish in a better way.

"If I have to dream about how I want to stop playing, this is the perfect way."

With the decision made last month at Toronto, Pennetta was more relaxed as she played her final Grand Slam event.

"Maybe that's why I'm here today (as champion)," she said. "It takes a lot of pressure out. I was trying to play every match like it was my last one."

Pennetta detailed her retirement plans after the match, saying she will play to the end of the year, including events at Wuhan and Beijing and the WTA Finals in Singapore if she qualifies.

But Pennetta has no plans to defend her crown or consider the 2016 Olympics because she says the time to leave is now.

"Sometimes it's getting hard for me to compete," Pennetta said. "If you don't fight every week in the same way I did today, it's going to be like bad. And I don't feel I have this power anymore. So this is the perfect moment.

"Was a really hard decision to make, but I'm really happy that I did it." (Pennetta Happy to Quit as Champion)

Pennetta only told her teen roommate and surrogate sister Vinci she would retire just before the awards ceremony.

"It's so magical because you have one of your best friends with you at this moment," Pennetta said. "She was unbelievable."

Pennetta's journey to a title on the New York hardcourts included having a drone crash into an empty part of Louis Armstrong Stadium during a second-round match against Romania's Monica Niculescu, making her fear some sort of attack.

Pennetta's decision to retire came at a tuneup event last month in Canada.

"I have to say, Toronto was the moment where I really say, 'It's the time,'" she said. "For me, sometimes, it's getting hard to compete." ('Miracle' Girl Roberta Vinci Goes Down Joking)

Even if she lost on Saturday, Pennetta had decided she was done at season's end.

"Winning or lose today, nothing was going to change. The decision was already there," she said.

Retirement did not nag at Pennetta's mind as she went through her matches.

"Sometimes it was getting in my mind, but I didn't think too much about that," she said. "I was just focused on my game. Just play tennis. That was my goal."

Now Pennetta, whose boyfriend is Italian ATP player Fabio Fognini, faces the unknown and strange world of life after tennis.

"I don't know what I like to do, so I have to discover everything," she said. "It's a new life for me.

"Sometimes we are more scared to take the decision because we don't know what we like or what we're going to do after, how is going to be the life.

"But I think it's going to be a pretty good life. I did everything that I expected.

Comments
Topics mentioned in this article
Flavia Pennetta Roberta Vinci Tennis
Get the latest Cricket news, check out the India cricket schedule, Cricket live score . Like us on Facebook or follow us on Twitter for more sports updates. You can also download the NDTV Cricket app for Android or iOS.