The United States, a record 17-time Fed Cup champion, was relegated from the top-tier World Group on Saturday, dropping out Melanie Oudin lost her singles match to Andrea Petkovic of Germany. 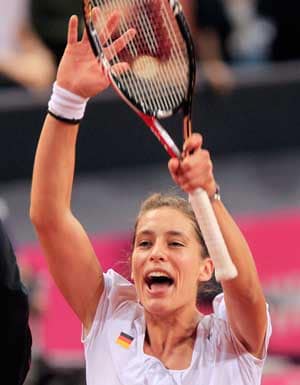 The United States, a record 17-time Fed Cup champion, was relegated from the top-tier World Group on Saturday, dropping out Melanie Oudin lost her singles match to Andrea Petkovic of Germany.

Petkovic won 6-2, 6-3 to give Germany an insurmountable 3-0 lead in the best-of-five series against a U.S. team playing with out Venus and Serena Williams.

"I never won a clinching match before," Petkovic said. "I believe that Germany belongs to the top group and I am really pleased that I won the point.

"I am very relieved. It may have looked easy but it wasn't a given."

The Americans were Fed Cup runners-up in the last two years, losing both times to Italy, but could not overcome the higher-ranked Germans.

Germany now returns to the World Group of the top eight nations.

"I must say the Americans were not at full strength, but the Williams sisters have not played for a while and they were still in the last two finals," Petkovic said.

Oudin said knowing that the U.S. team would be relegated if she lost was on her mind.

"I tried not to think about it but it was extra weight on my shoulder," she said.

Watching from the stands in Porsche Arena was Venus Williams, who hasn't represented the U.S. in four years and was unavailable because of a hip injury.

By appearing in Germany, Williams becomes eligible for the 2012 London Games. Players have to make themselves available for the Fed Cup to play in the Olympics.

Williams has been sidelined since the Australian Open. Serena Williams, who also hasn't played for the U.S. since 2007, has been out of tennis since Wimbledon because of two operations on her foot and a blood clot in her lungs. In addition, the U.S. team lost Bethanie Mattek-Sands, who would have been its top-ranked payer, to a hip injury.

That left 19-year-old Oudin and 18-year-old Christina McHale leading the American team, and both lost their opening singles Saturday.

Petkovic, the highest-ranked player in the tie at No. 19, faced Oudin in the first of the reverse singles and broke serve for a 3-2 lead and cruised from there in the first set.

The German double-faulted on her first set point but hit an ace on the second.

Oudin dropped serve in the first game of the second set, then double-faulted to go down 3-0.

The American lost the next game too, before winning the next three. But Petkovic did not allow the match to slip away and hit a forehand return winner to seal Germany's victory.

"I was really on the run for seven, eight games, I was feeling the ball well, but you have to mix it up with her," Petkovic said. "I was playing clever, opening up the court."

Oudin said Petkovic was more comfortable with the court surface.

"I definitely started well but, after I lost my serve the first time, she took her game to another level," Oudin said. "Also, it's my first week on red clay while she grew up on it."

Comments
Topics mentioned in this article
Tennis Anastasia Pavlyuchenkova Nadia Petrova Venus Williams United States Maria Sharapova
Get the latest updates on Fifa Worldcup 2022 and check out  Fifa World Cup Schedule, Stats and Live Cricket Score. Like us on Facebook or follow us on Twitter for more sports updates. You can also download the NDTV Cricket app for Android or iOS.