Big-serving Isner, who withdrew from last week's mixed teams Hopman Cup in Perth with the injured knee, said he had a decision to make about playing in the year-opening Grand Slam in Melbourne. 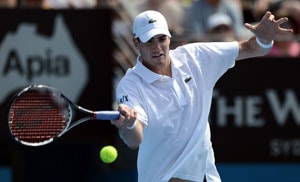 Big guns John Isner and Gilles Simon tumbled out of the Sydney International on Wednesday as Jarkko Nieminen stayed on course to defend his title.

Towering number one seed Isner crashed out 6-4, 6-4 to fellow American Ryan Harrison in the second round and raised doubts about whether he will play in next week's Australian Open with a bruised right knee.

French second seed Simon bowed out of the tournament without hitting a ball, succumbing to a recurring neck injury and giving an opportunity to lucky loser Ivo Klec to face Nieminen.

Big-serving Isner, who withdrew from last week's mixed teams Hopman Cup in Perth with the injured knee, said he had a decision to make about playing in the year-opening Grand Slam in Melbourne.

"It's better. Definitely better than I thought, but it's not 100 percent," Isner said. "I don't know. I've got a decision to make shortly.

"It needs rest. That's what I've done. That's the only thing I've done ever since I felt it last week.

"I will need to take time off somewhere. That's a given. It's not just going to heal. I can't play all the way through and have it heal."

Simon also has injury concerns ahead of the Australian Open but is more confident than Isner of playing in Melbourne.

"I made a bad move yesterday playing in the doubles during the tie-break and it's not the first time it's happened to me," said Simon, who won this event two years ago.

"I have time if I don't have any complications. It's really difficult for three or four days so it should be right although it's not the best preparation for the Open."

Nieminen will face a tough test against Tomic, who knocked out German fifth seed Florian Mayer, 7-6 (7/4), 6-2.

"Tomic has started the year really well. I think he hasn't lost a match," Nieminen said.

"It wasn't a tour event, but he beat (Novak) Djokovic and other good players at the Hopman Cup and he played well yesterday. I think he has improved a lot physically."

"After the match Florian said, 'you're serving unbelievable, nothing I could do'," Tomic noted.

"It's good to hear that from all the players I'm playing. There is talk now that I'm serving really good and my groundstrokes are really good too.

"I'm moving really well. There is nothing much more I can ask myself at this stage."

Frenchman Julien Benneteau, who lost to Nieminen in last year's final, strolled into the quarters against Harrison after his sixth seeded opponent Radek Stepanek quit with a strained upper back after playing just four points.

Comments
Topics mentioned in this article
Tennis John Isner Gilles Simon
Get the latest updates on ICC T20 Worldcup 2022 and CWG 2022 check out the Schedule, Live Score and Medals Tally. Like us on Facebook or follow us on Twitter for more sports updates. You can also download the NDTV Cricket app for Android or iOS.