Azarenka, the Belarus player ranked No. 3, won a sloppy match against the Serb as both players committed more unforced errors than hit winners. The two-time Australian Open champ will face fifth-seeded Sam Stosur of Australia, a 7-6 (2), 6-3 winner over Virginie Razzano of France. 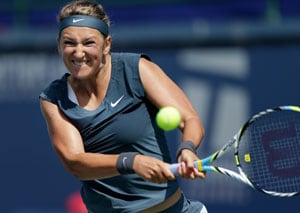 Top-seeded Victoria Azarenka beat seventh-seeded Ana Ivanovic 6-0, 4-6, 6-3 on Saturday to advance to the final in the Southern California Open.

Azarenka, the Belarus player ranked No. 3, won a sloppy match against the Serb as both players committed more unforced errors than hit winners. The two-time Australian Open champ will face fifth-seeded Sam Stosur of Australia, a 7-6 (2), 6-3 winner over Virginie Razzano of France.

"When you play a tournament, it's never going to be just easy matches," Azarenka said. "You have to go through the tough battles and this was one of the days. I'm just happy with the end result that you can overcome things and still find a way to win, that's the most important."

The semifinal win will propel Azarenka, the former world No. 1, past Maria Sharapova of Russia into the No. 2 slot when the new rankings come out Monday.

"I gave her too many easy points, especially at the important moments, like 40-all or deuces," Ivanovic said.

Azarenka, playing her first event since withdrawing from Wimbledon because of a right knee injury, scored the first of her two service breaks of the final set to take a 3-2 lead. When Ivanovic had four unforced errors in the ninth game, including a backhand into the net on the final point, Azarenka secured another break for the win.

"She's a really big shot maker," Azarenka said about Ivanovic. "She loves to take her opportunities and just bang the ball and find those deep shots. The key for me was not to let her take those shots and be the one who's putting on pressure."

The first set wasn't as lopsided as the score indicated. Each of the first four games were long and drawn out. But after Azarenka broke the Serb's serve at love in the fifth game, she quickly held serve to win the first set.

Ivanovic clearly seemed to gain confidence as she won the first three games and took a 4-1 lead. But Azarenka then rolled off the next three games to tie the set before Ivanovic closed it out by holding serve, then breaking Azarenka's serve at love to force a third set.

Comments
Topics mentioned in this article
Tennis Marion Bartoli Ana Ivanovic Victoria Azarenka Dominika Cibulkova
Get the latest updates on IPL 2021, IPL Points Table , IPL Schedule 2021 , live score . Like us on Facebook or follow us on Twitter for more sports updates. You can also download the NDTV Cricket app for Android or iOS.