Ranked 12th in the world, American John Isner has won two of his nine career titles in Atlanta, where he also lost to Mardy Fish in the 2010 and 2011 finals and to eventual champion Andy Roddick in the 2012 semi-finals. 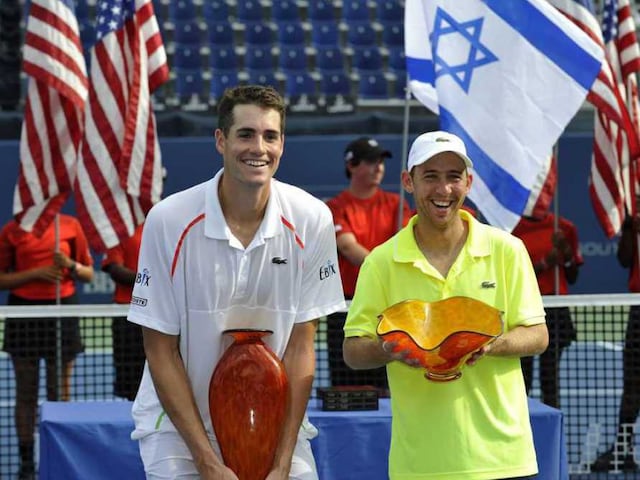 John Isner, left ,bends down a foot during the trophy presentation to be level with Dudi Sela, of Israel, at the Atlanta Open tennis tournament Sunday, July 27, 2014, in Atlanta. Isner defeated Sela 6-3, 6-4.© AP
Atlanta, USA:

Serving for the match, the 6-foot-10 Isner fell behind 30-0 before Sela sent a backhand into the net, and then watched almost helplessly as the American ripped three straight aces for the win. Isner finished with 15 aces to Sela's two. (Also read: When Tennis' Big Guys Become Too Big for Just a Handshake)

Ranked 12th, Isner has won two of his nine career titles in Atlanta, where he also lost to Mardy Fish in the 2010 and 2011 finals and to eventual champion Andy Roddick in the 2012 semi-finals. In running his Atlanta record to 16-3, the former University of Georgia star had the crowd on his side on a 92-degree afternoon under bright sun.

"I consider myself very fortunate that this tournament is even here," Isner said. "It's a big advantage to be in Georgia and have the support."

"I was able to get up early, and I was playing from ahead," Isner said. "I like that situation a lot given the conditions and how I'm serving," Isner said. "I think it was not so much that he was feeling the heat, but the conditions were different. The ball was so lively. My serve is tougher during the day than it is at night ... the ball was getting up on him a lot."

Sela was playing in just his second ATP final after losing to Roddick in Beijing in 2008.

Comments
Topics mentioned in this article
John Isner Dudi Sela Andy Roddick Mardy Fish Tennis
Get the latest updates on IPL 2020, check out the IPL Schedule for 2020 and Indian Premier League (IPL) Cricket live score . Like us on Facebook or follow us on Twitter for more sports updates. You can also download the NDTV Cricket app for Android or iOS.