Wawrinka emerged from the shadows of legendary compatriot Roger Federer with a string of major semi-final appearances that lifted him into the top 10 after starting 2013 ranked 17th. 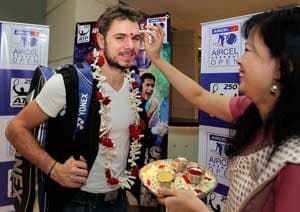 Swiss world number eight Stanislas Wawrinka will look to extend the good form he showed in 2013 by when he kickstarts the new season at the ATP Chennai Open from Monday.

Wawrinka emerged from the shadows of legendary compatriot Roger Federer with a string of major semi-final appearances that lifted him into the top 10 after starting the year ranked 17th.

The 28-year-old created a sensation at the US Open in September with a quarter-final win over defending champion Andy Murray, before losing to Novak Djokovic in a five-set semi-final thriller.

Wawrinka then qualified for his maiden ATP World Tour Finals in London last month where he reached the semi-finals, before losing once again to Djokovic.

The star hopes a good performance in his sixth appearance in the $450,000-event in Chennai, which he won in 2011, will boost confidence ahead of the Australian Open in mid-January.

"I feel good to be where I am," Wawrinka said in an organisers' media release. "2013 was definitely an outstanding year for me. It showed me how close I am to the top guys and that I have my chances against them."

Wawrinka said his goal in the new year was to be as consistent as the top players like Djokovic, Nadal, Murray and Federer.

"I'm confident going into 2014," he said. "Top players are extremely tough to beat and you need to play your best tennis. However, if you work hard and keep fighting everything is possible."

Wawrinka, who enjoyed a 51-23 win record in 2013, faces a tough field in Chennai that includes world number 15 Mikhail Youzhny of Russia, number 16 Fabio Fognini of Italy and the 26th-ranked Benoit Paire of France.

Also in the line-up are Canadian Vasek Pospisil, the Spanish duo of Marcel Granollers and Roberto Bautista-Agut, and Frenchman Edouard Roger-Vasselin.

Defending champion Janko Tipsarevic of Serbia withdrew from a seventh appearance at the Chennai Open after failing to recover from a heel injury that has troubled him all through the year.

Youzhny, 31, begins his 15th season on the circuit looking for a good work-out in the season-opener where he won the 2008 title with a stunning 6-0, 6-1 demolition of Nadal in the final.

The Russian veteran, who won two titles in 2013, says he takes great pride in the fact that he and Federer are the only two players to finish in the top 50 every year since 2002.

"Its not bad when you share an honour with Federer," Youzhny said.