Top-seed Ferrer out, Nadal sees off Berlocq in Barcelona Open

Nadal owns bragging rights in Barcelona after winning seven titles in eight editions and posting a 36-1 lifetime record at the Catalan venue. 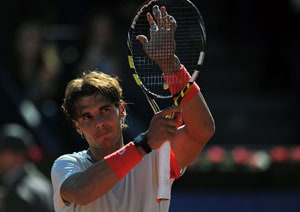 Rafael Nadal restored the balance of clay power at the Barcelona Open on Wednesday with a 6-4, 6-2 win over Carlos Berlocq after top-seeded compatriot David Ferrer was eliminated by Dmitry Tursunov.

Nadal may have still been feeling the effects of his Monte Carlo final loss at the weekend to Novak Djokovic, a defeat which denied him an historic ninth consecutive title in the principality.

Seeded second for the first time ever behind Ferrer, he needed six match points to see off persistent Argentine Berlocq, whom he had beaten on Brazilian clay two months ago.

The match was played in a swirling wind which bothered the Spaniard. "It was not very comfortable and it affected my game," said Nadal," who next plays Frenchman Benoit Paire, who beat Pablo Andujar 6-4, 5-7, 6-3.

"I don't want to talk about being a tltle favourite, I'm just very happy to be playing well and into the third round."I'm not looking ahead.

Nadal owns bragging rights in Barcelona after winning seven titles in eight editions and posting a 36-1 lifetime record at the Catalan venue.

His defeat of Berlocg was his 35th win in a row here since losing to current Davis Cup captain Alex Corretja in the 2003 second round.

He now stands 22-2 on the clay this season in which he only returned to tennis in February after seven months out with knee injuries.

Ferrer could offer little explanation on his loss as he played for the first time since a thigh injury in the Miami final against Andy Murray nearly a month ago.

"I couldn't seem to hurt him with my shots. it was a strange match mentally and physically," said the bewildered 31-year-old, known as the iron man of the game for his never-say-die retrieving.

"This was a match to forget - probably one of the worst I've played in recent years.

"Each year it will become more difficult for me to win the tournament," said the four-time finalist.

"I came back well in the second set but the third got away from me very quickly, I really wasn't competitive."

More than an hour after his win, the 66th-ranked Tursunov was puzzled as to how he had accomplished the upset.

"I'm not so sure, this was certainly not his best match. he's not played a lot recently and you need time to get back into rhythm.

"I tried to keep up a fast pace and not give him any time. He certainly has the advantage over me on clay."

Tursunov executed in style in just under two hours to spoil the pre-French Open clay debut of Ferrer.

The Russian needed only five aces in a win where he struck 30 winners and 50 unforced errors. But Ferrer showed his rustiness with a mere 15 winners and 32 miscues.

Ferrer was making his 11th consecutive Barcelona appearance to now stand 25-11 at the venue.

Fourth seed Nicolas Almagro joined Nadal with a win as he beat Ivan Dodig of Croatia 6-1, 7-5. Canadian fifth seed Milos Raonic made an easy start over Eduardo Roger-Vasselin of France 6-4, 6-2, as the North American made up for a disappointing loss last week in the Monte Carlo second round.

Comments
Topics mentioned in this article
Tennis Barcelona David Ferrer Rafael Nadal Carlos Berlocq
Get the latest Cricket news, check out the India cricket schedule, Cricket live score . Like us on Facebook or follow us on Twitter for more sports updates. You can also download the NDTV Cricket app for Android or iOS.