Radwanska, ranked fourth in the world and seeking her third title of 2013 after triumphs in Auckland and Sydney, had to battle to subdue her 40th-ranked opponent in two hours and 14 minutes. 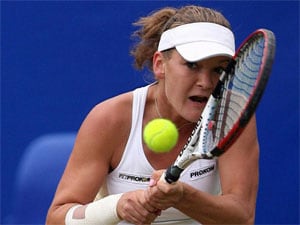 Top-seeded Agnieszka Radwanska held off determined American Varvara Lepchenko 7-6 (7/2), 3-6, 6-3 on Friday to reach the semi-finals of the WTA Bank of the West Classic.

Radwanska, ranked fourth in the world and seeking her third title of 2013 after triumphs in Auckland and Sydney, had to battle to subdue her 40th-ranked opponent in two hours and 14 minutes.

After Lepchenko had pocketed the second set to even the match, the two traded breaks in the first two games of the third. Lepchenko appeared to gain the upper hand when she broke Radwanska to love for a 3-2 lead, but Poland's Radwanska won the next four games to capture the match.

Cirstea advanced with a 6-3, 6-2 victory over Olga Govortsova of Belarus.

Cibulkova squandered a 5-1 lead in the first set before holding on for the straight-sets victory.

"The key today was staying aggressive," she said. "She's the kind of player who waits for your mistakes and uses your power, and I was doing great in the first set until 5-1. But then I started hoping she'd just give me the set, and all of a sudden it was 5-all and she was up 30-0 on my serve.

"But I made that game, and all of a sudden I started playing my game again and won the set. In the start of the second set I played more down-the-lines. She couldn't read where I was going anymore."

Cibulkova has won two of her three prior meetings with Cirstea, but the Romanian won their last encounter, in the quarter-finals here last year.

"She's another player who likes the fast surfaces, because she has a big serve and returns really well, so I'm prepared for a quick game and hopefully I'll get some experience from the two matches I've had so far this week," Cibulkova said.

Comments
Topics mentioned in this article
Tennis Cricket Dominika Cibulkova Agnieszka Radwanska Varvara Lepchenko Urszula Radwanska
Get the latest updates on IPL 2021, IPL Points Table , IPL Schedule 2021 , live score . Like us on Facebook or follow us on Twitter for more sports updates. You can also download the NDTV Cricket app for Android or iOS.