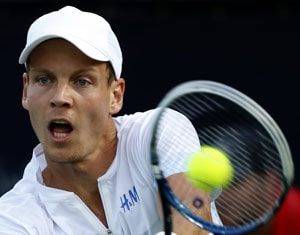 Top seeds Tomas Berdych and Milos Raonic strolled into the quarterfinals of the Portugal Open with straight-sets victories on Thursday.

Berdych goes on to play Leonardo Mayer, while Raonic faces Carlos Berlocq after the pair of Argentines were both winners, like Gastao Elias of Portugal and Victor Hanescu of Romania.