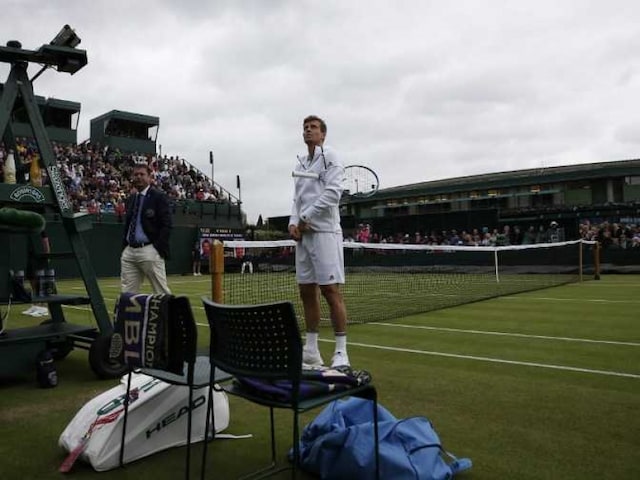 Tomas Berdych said he had asked the referee to stop the Wimbledon fourth round match due to the fading light but his request was denied.© AFP

Tomas Berdych fired a verbal volley at Wimbledon after being forced to play on into the twilight gloom then return on Tuesday to book his place in the quarter-finals.

Play finished a few minutes after the 9:19pm sunset in London and conditions were gloomy even before going into the lengthy tie-break. All other matches had been called off for the evening.

The pair returned for the final set on Tuesday, which 2010 Wimbledon runner-up Berdych won 6-3, claiming victory on his eighth match point.

"I can't really see. That's the fact. I was just asking to stop. When I ask, I've been told, 'It's too late, you have to finish that'," he said of the fourth set tie break.

"The referee tells you that the Hawk-Eye is not in operation anymore. I don't know why actually we have to play in those situations when a very accurate machine is not able to operate. I don't think the human eye can see better than that. That's another fact.

"I experienced this for a third time in a row. So I'm actually getting used to it."

Berdych asked if the match could be moved under the lights of the Centre Court roof, as has happened before with matches suspended due to darkness. Play can continue on Centre Court until 11:00pm.

But the frustrated Berdych said he had been literally left in the dark.

"I was asking for it. Especially when I've been playing for last couple of days consecutively. I just felt like there would be a chance to finish. But there was not really a clear answer why not," he said.

Two years ago, Berdych was involved in the latest-ever finish on Wimbledon's outside courts, when he lost to Marin Cilic at 9:38pm on June 27, 2014 -- a full 16 minutes after sunset.

Berdych called for more player power in deciding whether to carry on in fading light.

"We should have definitely some word in that because we are the ones who are on the court. We are the ones that are performing," he said.

"The decisions are made by people who are sitting at the chair. That's a bit unfair in this sense."

However, "when you feel that you can't really change any decision, it's really pointless to try".

It is only the second time the 30-year-old has reached the last eight since his run to the final six years ago.

"I practiced with him one day before the tournament started. That's the only time we've spent on the court together.

"There are plenty of things to see about his game. That's what I'm going to do and prepare with my team," said the Czech number one.

"Hopefully everything goes well, I can make the match done -- and finally have a day off."

Comments
Topics mentioned in this article
Tomas Berdych Jiri Vesely Lucas Pouille Tennis
Get the latest Cricket news, check out the India cricket schedule, Cricket live score . Like us on Facebook or follow us on Twitter for more sports updates. You can also download the NDTV Cricket app for Android or iOS.