Tipsarevic has had a dreadful run this season as he has slipped out of the top 10 in a downward trend which has accelerated over the last four months. 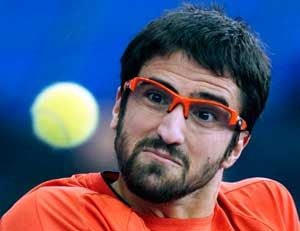 Serb Janko Tipsarevic continued a luckless 2013 run as the third seed was knocked out in his opening match at the Swiss Open 6-2, 6-2 by Dutchman Robin Haase on Thursday.

The stage was set for the return of Roger Federer to the court at the high-altitude Alpine village, with the tennis icon having last played Gstaad in 2004 when he won the title.

A decade and a half ago, a pony-tailed, teenaged Federer made his start on the ATP Tour with a wild card into the event, losing in the first round to Argentine Lucas Arnold.

The fifth-ranked Swiss who holds the record of 17 Grand Slam singles titles but has claimed just one trophy of any kind, in Halle, in 2013, was due to play his second round tie against Daniel Brands, the German who took him to three sets last week on clay in Hamburg.

Tipsarevic has had a dreadful run this season as he has slipped out of the top 10 in a downward trend which has accelerated over the last four months.

He began in January with a title in Chennai but has since managed only three quarter-finals including last week in Bogota.

The number 18 had no answer to Hasse, playing the tournament for the first time and now standing 16-18 this season and now one victory away from a 100th career success.

Tipsarevic went down two breaks in the second set and managed briefly to stop the rot before eventually falling in 61 minutes with six double-faults and dropping service four times.

The 2011 Gstaad winner, Marcel Granollers, moved into an ATP quarter-final for the third time this season with a 6-2, 7-5 second-round elimination of Federico Delbonis.

Delbonis had defeated Federer last weekend in a Hamburg semi-final upset before losing to Fabio Fognini.

Granollers, one of eight Spaniards to win the title here in the post-1968 Open era, claimed his win over the 65th-ranked Delbonis - he stood 114th last week - in 96 minutes on the fast clay at 800 metres above sea level.

Barcelona-native Granollers will be playing his first second quarter-final since Rome in May, where he lost to Benoit Pair after beating an injured Andy Murray in the previous round.

Victor Hanescu advanced into the last eight as Spanish eighth seed Roberto Bautista Agut retired with back pain in the second set to hand a 7-6 (7/2), 3-2 win to the Romanian.

Comments
Topics mentioned in this article
Tennis Robin Haase Rohan Bopanna John Isner Aisam-Ul-Haq Qureshi Janko Tipsarevic Julien Benneteau Badminton
Get the latest updates on IPL 2020, check out the IPL Schedule for 2020 and Indian Premier League (IPL) Cricket live score . Like us on Facebook or follow us on Twitter for more sports updates. You can also download the NDTV Cricket app for Android or iOS.