Naomi Osaka's WTA Finals debut ended in tears on Friday as she was forced to retire against Kiki Bertens. 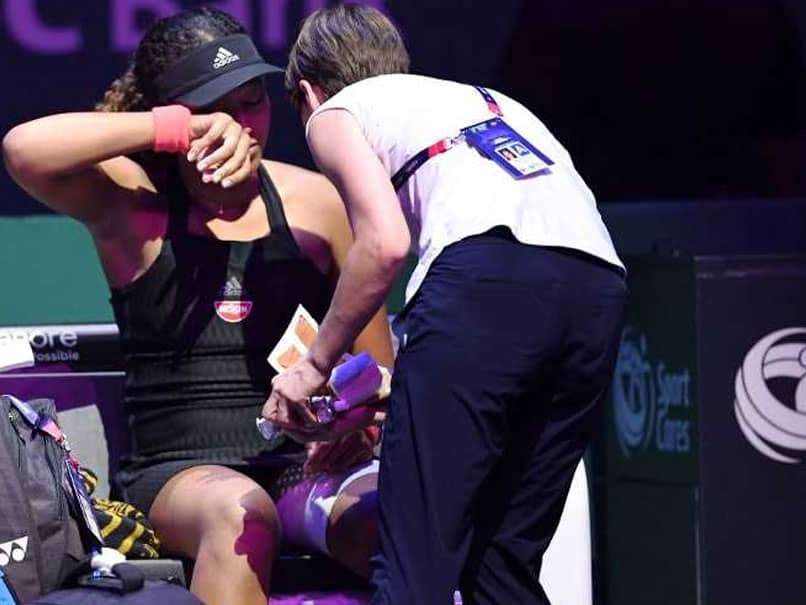 Japanese sensation Naomi Osaka forfeited the match due to an injury.© AFP

Japanese sensation Naomi Osaka's WTA Finals debut ended in tears on Friday as she was forced to retire against Kiki Bertens, handing the Dutchwoman a surprise spot in the semi-finals. Bertens won the first set 6-3 in 47 minutes at the Singapore Indoor Stadium before US Open champion Osaka, who wiped away tears, forfeited the match. It was a bitterly disappointing end for the 21-year-old, who came into Singapore as the form player but lost three-set matches to Sloane Stephens and Angelique Kerber.

But it was enough for Bertens to seal a final four spot in her debut at the season finale, having defeated top seed Kerber earlier in the round-robin phase.

Bertens only qualified for the WTA Finals just days before the tournament after world number one Simona Halep withdrew due to injury.

"It's never nice to win a match like this," Bertens said after the match. "I want to try to keep on going. I've had a lot of tough matches here."

Osaka had started the match brightly, rolling through her service games before being broken in the eighth game.

With her upper leg heavily strapped, Osaka called a medical timeout after the eighth game and required treatment in the locker room.

She came back on court but dropped her serve to love, culminating in a double fault which turned out to be her last action at the WTA Finals.

Kerber plays the unbeaten Stephens in the last round-robin match from Red Group, with the winner joining Bertens in the semi-finals.

Comments
Topics mentioned in this article
Kiki Bertens Tennis
Get the latest updates on IPL 2020, check out the IPL Schedule for 2020 and Indian Premier League (IPL) Cricket live score . Like us on Facebook or follow us on Twitter for more sports updates. You can also download the NDTV Cricket app for Android or iOS.