Stosur through, but dizzy exit for Chakvetadze

Last year's finalist Samantha Stosur made the second round of Stuttgart's WTA tournament on Tuesday as dizzy spells forced Russia's Anna Chakvetadze to retire for the third time this year. 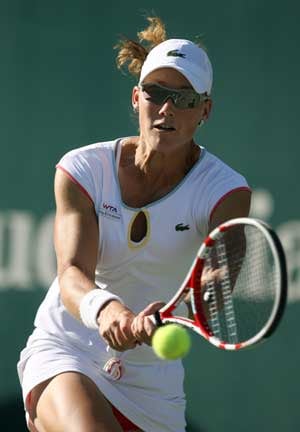 Last year's finalist Samantha Stosur made the second round of Stuttgart's WTA tournament on Tuesday as dizzy spells forced Russia's Anna Chakvetadze to retire for the third time this year.

Stosur, the fifth seed, needed just 80 minutes to see off Spaniard Maria Jose Martinez Sanchez for a 7-5, 6-1 win as the Australian booked her place in Wednesday's second round along with a trio from Germany's Fed Cup team.

Brisbane-born Stosur, 27, had few problems against Martinez Sanchez, who held her own in the first set and battled back from an early break.

Stosur secured a second break in the 12th game to take the opening set before she cruised into a 5-0 lead in the second when Martinez Sanchez stopped the rot when serving to save the match.

The Spaniard avoided the embarrassment of a whitewash, but Stosur kept her composure and served out to set up a second round clash with Slovakia's Daniela Hantuchova, who enjoyed a 7-5, 6-3 win over Romania's Alexandra Dulgheru.

World number one Caroline Wozniacki of Denmark will make her debut at this year's tournament on Wednesday when she takes on Slovakia's Zuzana Kucova.

There are concerns for Chakvetadze after the 24-year-old qualifier, collapsed again with dizziness during her first-round match with Kucova.

The 24-year-old Russian dropped to the clay-court floor during a break in the third set and needed medical attention before retiring from the match with the score at 1-6, 7-5, 4-4 to Kucova.

Chakvetadze also retired in similar circumstances during February's tournament in Dubai and again at Indian Wells last month as doctors struggle to identify the problem.

"I started the match feeling fine, but I knew the dizziness was coming and started to feel worse in the second set," said the Russian.

"It was the same feeling as the two times before."

The Russian said she had sought medical advice on whether to play in Stuttgart and her future plans remain unclear as she looks for the cause of the problem.

"I saw a doctor before the tournament and they told me everything would be ok, which is why I decided to play here," she said.

"But now it's the third tournament in a row I have had to retire with this dizziness problem.

"It seems the doctors don't have all the answers yet, so I have to rest and hopefully we will find a solution."

All three Germans made it through to the next round as Germany's 5-0 Fed Cup white-washing of the USA here at the same venue last weekend spilled over into the WTA event.

Rising star Andrea Petkovic - the first German into the world's top 20 for four years -- had the toughest passage as she fought back from losing the first set for a 3-6, 6-2, 6-2 win over Austrian qualifier Tamira Paszek.

The German number one recovered from losing the first set and took a 3-0 lead in the second before overcoming her own nerves in front of her home fans for a win in just over two hours.

She will play seventh-seed Jelena Jankovic - who won the 2008 tournament here - in the second round after the Serb beat Spain's Beatriz Garcia Vidagany 6-1, 6-2 on Tuesday night.

"I was tired," admitted Petkovic after winning both her Fed Cup games at the weekend.

"It took me a bit longer than normal to get up to speed, like a diesel engine."

She will be joined in Wednesday's second round by compatriots Sabine Lisicki, who faces sixth seed Na Li of China, and Julia Goerges, who will take on fourth-seed Victoria Azarenka of Bulgaria.

Comments
Topics mentioned in this article
Anna Chakvetadze Samantha Stosur Tennis
Get the latest updates on ICC T20 Worldcup 2022 and CWG 2022 check out the Schedule, Live Score and Medals Tally. Like us on Facebook or follow us on Twitter for more sports updates. You can also download the NDTV Cricket app for Android or iOS.