Sloane Stephens Marvels at Money And Journey to US Open Glory

Stephens, who won only $310,000 this year after being sidelined for 11 months until July by a left foot injury, said her desire for more major titles was definitely fueled. 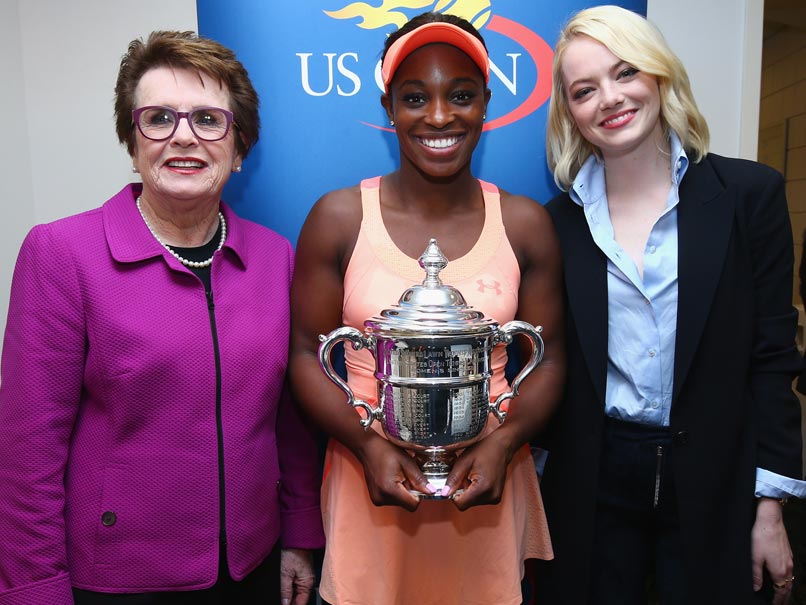 Stephens, 24, is the girlfriend of footballer Jozy Altidore, who she met in the 5th grade.

Worries didn't end for Sloane Stephens after winning her first Grand Slam title Saturday at the US Open, recalling the fabulous photographs of past champions she admired along the hallways of Arthur Ashe Stadium.

"Everyone has the cutest photos on the wall in here with this trophy and that's what I remember seeing most," Stephens said.

"So when I was taking my pictures I was worried about my boob sweat because I was like this is a picture they are probably going to use and I look terrible."

Such natural, candid and comedic comments summed up the champion's mood after her 6-3, 6-0 victory over fellow American and friend Madison Keys for a top prize of $3.7 million (3.07 million euros).

Stephens, who won only $310,000 this year after being sidelined for 11 months until July by a left foot injury, said her desire for more major titles was definitely fueled.

"Of course," Stephens said. "Did you see that check that lady handed me? Like, yes. Man, if that doesn't make you want to play tennis, I don't know what will."

Asked if she felt bad about inflicting the first 6-0 final set in a US Open women's final since 1976 upon her friend, Stephens noted Keys had a runner-up prize of $1.825 million.

"Bad for her? She was in the finals, too," Stephens said. "Did you see the check she's about to get? I'm sure she'll be just fine."

Told she made only six unforced errors in her 61-minute triumph, Stephens was thrilled and shocked.

"Shut the front door. I don't think that's ever happened to me before. Oh, my God. That's a stat. Snaps for me," Stephens said, snapping her fingers for emphasis.

Stephens has already made her mark in the US Open locker room, noting -- "They already engraved my name on the locker. Like, hello. This is awesome."

But she was unsure if she had "arrived" as a player.

"I don't know if I have arrived or already arrived, been arrived," she said. "But I do know I'm a US Open champion."

Stephens, 24, is the girlfriend of footballer Jozy Altidore, who she met in the fifth grade.

The American international scored two goals in Toronto's 4-0 Major League Soccer victory over San Jose while Stephens was in the final.

"I'm happy that he scored two goals. That's really good," Stephens said. "He should have got a hat trick. It would have been such a good day."

Stephens admitted to feel nervous the night before the match, saying she was searching for things to do.

"I was literally in my room twiddling my thumbs, looking at car reviews last night on Auto Trader. That's how bored I was. I didn't have anything to do," she said, noting she wasn't planning on buying a car.

"No, I was just looking at safety reviews, honestly," Stephens said. "That's kind of weird, but that's what I was doing."

What she hasn't been doing is college course work, so her scheduled December 14 graduation might not come off as planned.

"I'm totally not going to graduate. I haven't done any work for two weeks," she said. "My professors actually texted me, so maybe they'll let me, you know, slide."

Stephens used the word "insane" several times to describe her tale of rising from left foot surgery in January to a US Open crown.

"I was thinking about all the wrong things. Once I kind of let that go and just realized that whatever is meant to be is going to be, I worked hard to get here and a lot of that stress was relieved.

"There are no words to describe how I got here, the process it took or anything like that because if you told someone this story, they'd be, like, 'That's insane.'"

Comments
Topics mentioned in this article
Sloane Stephens Tennis
Get the latest updates on Fifa Worldcup 2022 and check out  Fifa World Cup Schedule, Stats and Live Cricket Score. Like us on Facebook or follow us on Twitter for more sports updates. You can also download the NDTV Cricket app for Android or iOS.