Stanislas Wawrinka's opponent - Vasek Pospisil - conceded the match despite taking the first set 6-4, due to a sore back. Eduard Roger-Vasselin too had to fight hard for his 6-2, 3-6, 6-3 win against Spaniard Marcel Granollers. 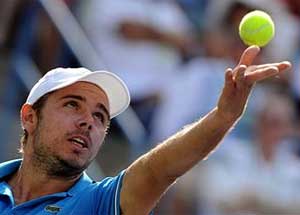 World No.8 Stanislas Wawrinka and Eduard Roger-Vasselin survived close semi-final matches here on Saturday to make it to the title round of the Aircel Chennai Open.

The 28-year-old Swiss Wawrinka, winner here in 2011, looked relieved when Canadian World No.32 Vasek Pospisil conceded the match due to a sore lower back at 5-5 in the second set after the top seed had taken the first at 6-4.

Pospisil, who had Wawrinka, the top seed, in a corner in the second set, thus became the fifth player in the tournament to retire.

In the other semi-final, Roger-Vasselin had to dig deep to overcome an inconsistent sixth seeded Spaniard Marcel Granollers 6-2, 3-6, 6-3.

Wawrinka, who in 2013 broke into top 10 for the first time and also reached the US Open semi-finals beating Andy Murray, was stretched to break point by the 23-year old Pospisil whose lower back eventually gave way just as he seemed to be peaking.

Wawrinka, who belongs to the rare breed of one-handed players like his sparring partner Roger Federer, did just enough to win the first set in which the six-foot, four-inch Pospisil, who helped Canada reach the Davis Cup final last year, had his chances.

Pospisil blew six break points to lose the first set that Wawrinka clinched with a service break in the fifth. The lanky Canadian did well to keep pace with his senior opponent, but didn't quite play well on the big points.

At 1-1 in the second set, Pospisil took a medical time out as the courtside trainer worked on the player's lower back. On resumption, the Canadian looked a step slower and dropped serve in the seventh, but broke back in the eighth.

Wawrinka had trouble holding serve. In fact, there were two 10-minute games on the Swiss' serve before Pospisil broke for the first time in the match in the eighth game. However, with the players tied at 5-5, the young Canadian walked up to the net and shook hands with Wawrinka to concede the tie.

"I feel sorry for Vasek. I just hope that he gets well in time for the Australian Open. I am playing the best tennis of my career and look forward to tomorrow's final against Eduard (Roger-Vasselin)," said Wawrinka in a courtside chat after the match.

Earlier, the seventh seeded Roger-Vasselin, in his 13th season on the Tour, but playing just his second ATP semi-final, served better and was far more consistent in shot making to overcome the 27-year old, 32nd-ranked Spaniard who was just far too erratic, with his game swinging from sublime to mediocre.

The 30-year old Frenchman, who has never quite made a lasting impression on the tour despite a long sojourn, and broke into top-50 for the first time last season (48 in October), showcased his obvious talent with some searing double-handed backhands and wonderful retrievals.

Granollers, who knocked out fourth seeded Benoit Paire Friday in three punishing sets, started the semi-final on the wrong foot. He was barely in the frame and was twice broken in the first set, but found his range and rhythm in the second that saw a dramatic shift in momentum.

The Spaniard, swinging freely and blasting winners, had Roger-Vasselin scrambling around the court. Granollers, who was ranked 19 in July 2012, raced to 4-1 from 1-1 with two breaks of serve and though he dropped serve in the sixth, the Spaniard was not to be denied as he broke the Frenchman in the ninth for the set.

Roger-Vasselin, whose father Christophe was ranked 39 in 1983 when he reached the French Open semi-finals, started the third by dropping serve in the first game and Granollers quickly went 2-0 up.

However, the Frenchman surged back by taking six of the next seven games with two breaks in the fourth and sixth before serving out the match.

"I had to battle hard and when I was down 0-2 in the third after losing the second set, I told myself not to panic and I didn't lose confidence.

"I hit a lot of winners in the first set, but made some mistakes in the second. In the third set, I just wanted to do my best," said Roger-Vasselin.

"It was a tough match. I was break-up in the third and had a chance to win, but lost in the end. I was a little tired from yesterday and finished the match (against Paire) late, but he played better than me. He was very aggressive from the start and I did not play up to the mark," said Granollers after the match.

Comments
Topics mentioned in this article
Tennis Xavier Malisse Stanislas Wawrinka Vishnu Vardhan Rafael Nadal Vijay Amritraj
Get the latest updates on IPL 2020, check out the IPL Schedule for 2020 and Indian Premier League (IPL) Cricket live score . Like us on Facebook or follow us on Twitter for more sports updates. You can also download the NDTV Cricket app for Android or iOS.