Stan Wawrinka claimed the 13th title of his career and second of the season after Chennai, improving to 13-2 in 2016. 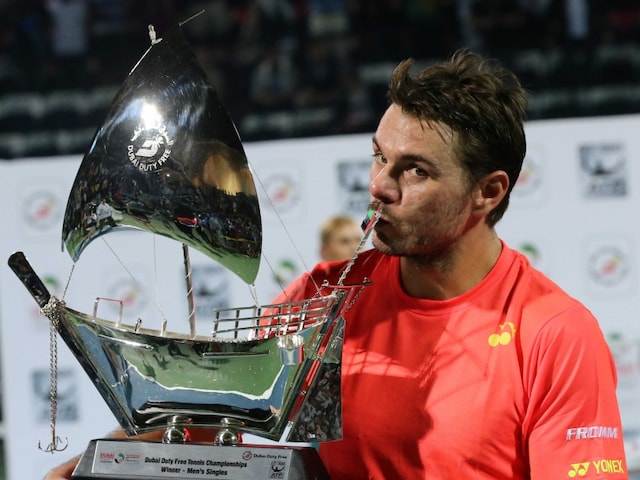 Stan Wawrinka of Switzerland celebrates with the trophy after defeating Marcos Baghdatis of Cyprus during their ATP finals match of the Dubai Duty Free Tennis Championships.© AFP
Dubai:

Stan Wawrinka won his ninth straight final with a 6-4, 7-6 (15/13) defeat of Marcos Baghdatis to clinch the Dubai ATP title on Saturday after a "crazy tiebreaker". (Read More in Tennis)

The French Open champion from Switzerland claimed the 13th title of his career and second of the season after Chennai, improving to 13-2 in 2016.

The match lasted for almost two hours, with Wawrinka leading 4-1 in the tiebreaker but forced to go the distance as he saved five set points before winning when a Baghdatis return went wide on a fourth match point.

"Until 6-all in the tiebreak I was always up with a mini-break. I did I think two double faults and two or three, three quick mistakes," the winner said.

The 30-year-old came to the emirate as second seed having not played the tournament in eight years and without a match win until getting through the first round.

"I'm really happy to have another trophy. It's an amazing feeling, especially today as I was playing some really good tennis. It was a tough final."

He added: "This was my best match of the week, I'm happy with my level today. I had to fight until the end -- it was a quite crazy tiebreaker."

Wawrinka, the world number four, lost his last final in June, 2013 at the grasscourt event at 's-Hertogenbosch in the Netherlands.

"I've had a great run at finals. When I get to them I really want to win. You are carrying a lot of confidence from during the week," he said.

"I've always wanted to come back to Dubai, I was last here a long time ago. I lifted my level during the week and improved every day."

Wawrinka had to fight through the growing tension in what became one of the tightest finishes in the the event's 24-year-history.

Baghdatis now stands 0-5 in finals since winning his last title at Sydney in 2010.

The Cypriot has now lost all six times he has faced Wawrinka.

Baghdatis called his performance "a small light that I see in the tunnel".

"I'm happy I'm back and playing this kind of tennis now. It's just to continue improving, and play at this level throughout the year."

He added: "I was a bit unlucky in the tiebreaker, that was the difference. But more matches throughout the year at this level would make me go in there and believe from the beginning that I can win, not wait three, four games and start believing.

"I'm playing very good tennis. This week I think I was a bit lucky, but I also found a way to win. I didn't win the tournament but I won a lot more -- I won my confidence back."

Comments
Topics mentioned in this article
Stanislas Wawrinka Marcos Baghdatis Tennis
Get the latest Cricket news, check out the India cricket schedule, Cricket live score . Like us on Facebook or follow us on Twitter for more sports updates. You can also download the NDTV Cricket app for Android or iOS.