Somdev goes down to mighty Federer

India's Somdev Devvarman went down in straight sets to Roger Federer in the first round of the Dubai Duty Free Tennis Championships on Tuesday. 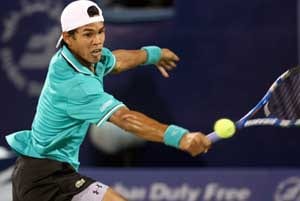 India's Somdev Devvarman went down in straight sets to Roger Federer in the first round of the Dubai Duty Free Tennis Championships here on Tuesday.

World No.2 Federer was largely untroubled as he came through 6-3, 6-3 against the 26-year-old Devvarman, who is ranked 77 places below the Swiss maestro.

The match was the biggest in wildcard Devvarman's career on the ATP Tour and he never really looked like pulling off a shock victory.

Federer marched into the last-16 as he bids to win his first title of the year.

Federer, who is four-time Dubai Duty Free champion, is making a comeback to the Aviation Club after a two year absence and is eager to add to the four titles he has already won in the UAE.

The Swiss champion has 67 titles in his 12-year career, including 16 Grand Slam titles.

Devvarman has reached two ATP Tour finals, the first in Chennai 2009 and later at SA Open in Johannesburg earlier this year.