World number 129 Devvarman, a two-time US college champion ranked 104 spots below Ukranian ninth seed Dolgopolov, advanced to the round of 16, where he could face US eighth seed John Isner on Thursday. 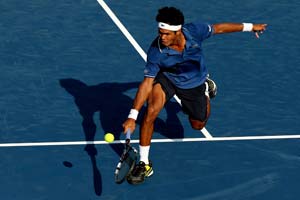 World number 129 Devvarman, a two-time US college champion ranked 104 spots below Ukranian ninth seed Dolgopolov, advanced to the round of 16, where he could face US eighth seed John Isner on Thursday.

"I'm very happy. That guy is a tough player, no question," Devvarman said. "I played really well. in the beginning. he gave me a couple errors to break him.

"He fought back in the second set. I was serving well. It kept me in the match. I gave myself looks on his serve. It was just confidence."

Devvarman, who lives and trains in nearby Charlottesville, has adjusted to the heat, often a stumbling block for foes in this early US Open hardcourt tuneup.

"It's such an advantage to be here to prepare for one of my favorite tournaments," he said.

Devvarman, who went to India after Wimbledon to work with a Chennai-based charity called "Life is a Ball," feels on top of his game.

"I'm pretty sharp," he said. "Physically for sure."

Japanese second seed Kei Nishikori, a career-best 11th in the rankings, will open with a second-round match Wednesday against US wildcard Jack Sock, who beat Dutchman Igor Sijsling 6-4, 6-2.

Nishikori, who has never played or practiced with Sock, is rated a title threat by Del Potro.

"He is another big favorite to win the tournament," Del Potro said of Nishikori after a practice session with him. "He is playing really well."

Women's top seed Angelique Kerber of Germany connected on only 39 percent of her first serves but still dominated US qualifier Irina Falconi 6-2, 6-3 to book a second-round date with American Melanie Oudin.

"It was difficult after such a long time without matches," said Kerber, who included a five-day Majorca vacation in her post-Wimbledon break. "I can improve more. My serve was not so good. I went out for 20 minutes to hit a little bit more after the match. I think it was a good idea."

"It was a tough match," Watson said. "I'm just glad I'm alive for another day."

Watson struggled with mononucleosis in April but said she felt healthy for the match.

"I'm just building my game back after being ill for so long," Watson said. "I'm feeling good now. I was saying while training before this tournament this is the first time this year that I felt good."

Comments
Topics mentioned in this article
Tennis Somdev Devvarman Nicolas Almagro Alexandr Dolgopolov
Get the latest Cricket news, check out the India cricket schedule, Cricket live score . Like us on Facebook or follow us on Twitter for more sports updates. You can also download the NDTV Cricket app for Android or iOS.