Gilles Simon upset top-seeded Janko Tipsarevic 6-4, 6-4 on Saturday to set up an all-French final against Richard Gasquet at the Thailand Open. 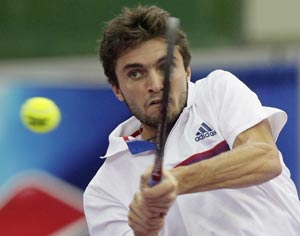 Gilles Simon upset top-seeded Janko Tipsarevic 6-4, 6-4 on Saturday to set up an all-French final against Richard Gasquet at the Thailand Open.

Gasquet rallied from a set and two breaks down to beat Jarkko Nieminen 3-6, 7-5, 6-2 after the Finn failed to serve out the match when leading 5-4 in the second set.

The fourth-seeded Simon won the title here in 2009 and improved his head-to-head record against Tipsarevic to 5-1. He broke the Serb in his first service game and then saved a break point in the 10th game before clinching the set when Tipsarevic netted a forehand.

The Frenchman then broke for a 5-4 lead in the second after winning a Hawk-Eye challenge on his fourth break point, as the replay system showed his forehand winner clipped the line.

"I think I couldn't do any better than that," Simon said. "Janko has been playing amazing tennis since last year. It's difficult to beat him."

Gasquet made a slew of errors to fall behind 4-0 in the second set against Nieminen before starting his fightback. When serving for the match, the Finn hit two straight double faults and a forehand error then allowed Gasquet to level the set at 5-5.

The Frenchman dominated after that, breaking twice more in the decider and clinching the win when Nieminen's backhand sailed wide.

Comments
Topics mentioned in this article
Tennis Jarkko Nieminen Monte Carlo Yen-Hsun Lu Gilles Simon Andy Murray Gael Monfils Janko Tipsarevic
Get the latest Cricket news, check out the India cricket schedule, Cricket live score . Like us on Facebook or follow us on Twitter for more sports updates. You can also download the NDTV Cricket app for Android or iOS.