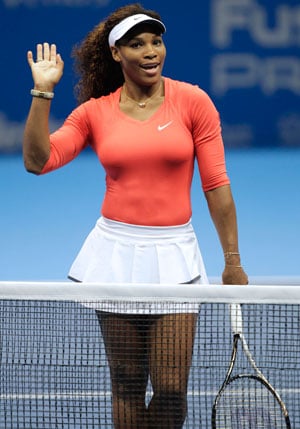 World number one Serena Williams powered through her semifinal match with Poland's Agnieszka Radwanska 6-2, 6-2 to advance to the final of China Open on Saturday.

The American 32-year-old pulled up injured after appearing uncomfortable in the fourth game of the third set, clutching her back as she walked off court with medical officials.

But the brief pause did not result in Serena losing her momentum, as she ruthlessly finished off the third seed in convincing style, breaking serve in the next game before closing in on victory.

The top seed in Beijing said she had not picked up any serious injuries during the match.

"My back was a little tight from playing a lot so I was just trying to release it," she said.

"Its been a little tight all week and it just spasmed a bit out there today."

The final will take place on Sunday.

Comments
Topics mentioned in this article
Agnieszka Radwanska Tennis
Get the latest updates on ICC T20 Worldcup 2022 and CWG 2022 check out the Schedule, Live Score and Medals Tally. Like us on Facebook or follow us on Twitter for more sports updates. You can also download the NDTV Cricket app for Android or iOS.