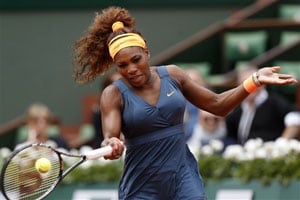 Serena Williams reached the WTA Championships semifinals by brushing aside 2011 winner Petra Kvitova 6-2 6-3 on Thursday to complete a clean sweep of her group matches.

The defending champion was relentlessly focussed against the former champion from the Czech Republic, hitting 27 winners and 11 immaculately delivered aces, taking her total for the season to a remarkable 468.

"Petra was aggressive too, but I think my serve did really well. I'm just glad to still be alive in the tournament -- I didn't have any expectations coming here, I just wanted to come and enjoy myself, and that's what I've done.

"It just feels good to not be out of the tournament."

Against Kvitova, Williams was intense, poised, rhythmical, and completely blinkered to thoughts outside the court.

She was 15-40 down in the first game when Kvitova's early ball hitting gave a warning of what she might be capable of. From then on Williams surged into a higher gear.

It was her third win in three days, which means she now has a day's rest before seeking a place in the final with a match against the runner-up in the other group, which could be Jelena Jankovic, Li Na, or Victoria Azarenka.

"I'm definitely going to watch the matches," said the world number one. "And then just lollygag around."

Azarenka has so far notably found it harder than Williams to remain mentally in good condition, and another was Agnieszka Radwanska, the third-seeded Pole, who had little left to offer against Angelique Kerber of Germany and departed the tournament with three losses.

Kerber, the last player to qualify for the tournament, is not the first to leave it.

Indeed she still has an outside chance of taking her wrong-footing angles and tenacious endeavour into the last four, but she would have to deliver a solid win over Kvitova to do it.

Another with a wandering mind was Li Na, who had humorously admitted to having intrusive thoughts about her holiday, along the latest of her pantomime criticisms of her husband who apparently got to choose their destination.

Li nevertheless moved to the brink of another significant first with a 6-3, 2-6, 6-3 win over Jelena Jankovic, the former world number one from Serbia, which put her top of the white group with two wins.

Li is already the first Chinese singles player to have won a Grand Slam title and to have reached the world's top five; now she is within touching distance of becoming the first to qualify for the semi-finals in the tour's flagship tournament.

It was an unpredictable up-and-down match, with Li having three points for a 4-2 lead in the second set, before losing five games in a row and most of her momentum, and then also letting slip a break of serve advantage in the final set to be pegged back to 3-3.

Jankovic, who has made an admirable comeback to the world's top eight after two career-threatening years with injury problems, was courageous, tenacious, and both a better server and more tactically positive than she used to be.

However Li was still the more forceful player off the ground, and sometimes adventurous in making fierce drive volleys from mid-court.

If other results go right she may qualify irrespective of the outcome of her last group match on Friday, which is a repeat of the Australian Open final against Victoria Azarenka.

s were playing unbelievable today, so it was more mental, and I was really happy I could play well again at the end of the match."

"I play Vika now. She's always a tough opponent. But right now I have nothing to lose, so I'm just going to play and enjoy the time."

Comments
Topics mentioned in this article
Nadia Petrova Petra Kvitova Caroline Wozniacki Elena Vesnina Mathilde Johansson Shahar Peer Petra Martic Sania Mirza Maria Sharapova Tennis
Get the latest updates on IPL 2020, check out the IPL Schedule for 2020 and Indian Premier League (IPL) Cricket live score . Like us on Facebook or follow us on Twitter for more sports updates. You can also download the NDTV Cricket app for Android or iOS.