Serena Williams, who is bidding for a record-equalling Open era 22nd Grand Slam title, will face Russian World No. 50 Elena Vesnina in the Wimbledon semi-finals 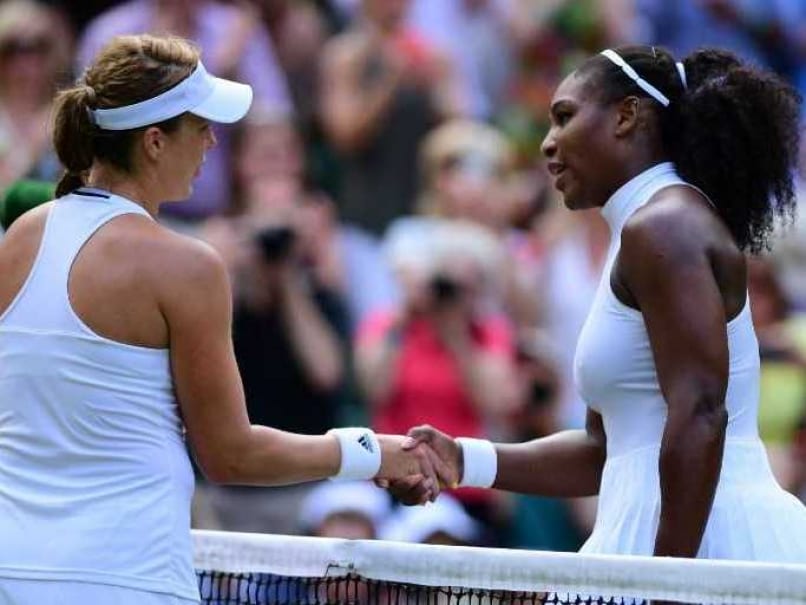 The 34-year-old world number one's win sets up the enticing prospect of a final showdown with sister Venus, a five-time champion who is also through to the last four.

Serena, who is bidding for a record-equalling Open era 22nd Grand Slam title, goes on to face Russian World No. 50 Elena Vesnina, who defeated Slovak 19th seed Dominika Cibulkova, for a place in Saturday's title match.

"They showed Venus's score on court and I was like 'yaaaay'. I want her to win so bad, but not in the final if I'm there," said defending champion Serena who took her Grand Slam match win record to 302 -- four behind Martina Navratilova's all-time mark.

It is the 11th time that the sisters have advanced to the semi-final of the same Grand Slam event.

Serena took a 5-0 career lead over Russian 21st seed Pavlyuchenkova into Tuesday's match, having not dropped a set to her opponent since their first meeting in 2010.

But the match was decided in the ninth game of both sets with Williams carving out the only breaks of the match against Pavlyuchenkova, playing in her first Wimbledon quarter-final.

The American finished the match with an 11th ace.

"It was good. I am excited to be able to win and get through, it felt really good," she said before heading off to play doubles with her sister.

"I am just trying to win my match. I knew I had a tough opponent and one thing I have learnt this year is just to focus on the match."

On the potential of an all-Williams final, Serena refused to get too far ahead of herself even though she has a 4-0 winning record over Vesnina.

"We don't really talk too much about it but we are playing doubles later so we are just happy to be in the semi-finals," she said.

Comments
Topics mentioned in this article
Serena Williams Anastasia Pavlyuchenkova Elena Vesnina Venus Williams Tennis
Get the latest updates on India vs Australia Series, check out the India vs Australia Schedule for 2020-21 and Ind vs Aus live score . Like us on Facebook or follow us on Twitter for more sports updates. You can also download the NDTV Cricket app for Android or iOS.