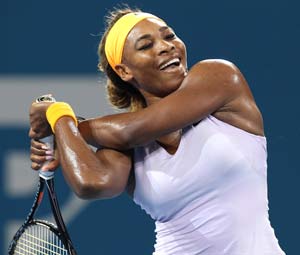 Serena Williams extended her winning streak against Maria Sharapova to 14 matches with a 6-2, 7-6 (7) semifinal victory Friday to earn a shot at back-to-back Brisbane International titles.

The defending champion will play second-seeded Victoria Azarenka in Saturday's final, and will be favored to retain the title that kicked off her stunning 2013 season that included 78 wins from 82 matches and 11 titles.

Williams improved to 15-2 against Sharapova, with both losses way back in 2004.

After blowing two match points in the tiebreaker - one on her serve and another receiving - Williams sealed the win with an ace.

In their first meeting since the French Open final, the uneasy rivals barely exchanged glances before the match and briefly shook hands after.

Comments
Topics mentioned in this article
Tennis Maria Sharapova Andy Murray Kim Clijsters Victoria Azarenka
Get the latest Cricket news, check out the India cricket schedule, Cricket live score . Like us on Facebook or follow us on Twitter for more sports updates. You can also download the NDTV Cricket app for Android or iOS.