Williams collected her 11th title of the year and became the first player to defend the title since Justine Henin in 2007. 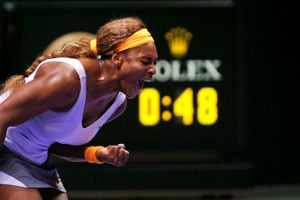 Serena Williams ended the best season of her career in suitable style, coming from behind to beat Li Na 2-6, 6-3, 6-0 on Sunday for her second straight WTA Championship.

Williams collected her 11th title of the year and became the first player to defend the title since Justine Henin in 2007.

The American won her fourth WTA Championship, having captured the elite tournament of the eight top-ranked players also in her debut in 2001 and in 2009 and 2012.

Williams has won 78 of 82 matches this year and will finish the year as the top ranked player for the third time in her career after 2002 and 2009.

Li was in her first WTA Championship final and will finish the year at a career-high No. 3.

Williams sank to her knees after firing a backhand winner on her second match point. She became the eighth female player to win 11 or more titles a year and the first since Martina Hingis claimed 12 in 1997.

The final featured two players aged above 30 for the first time in the championships' 43-year history. Williams is 32 and Li is 31 but both are playing some of their best tennis.

Li got off to a better start over a sluggish-looking Williams, who struggled a day earlier to beat Jelena Jankovic and complained later of being exhausted after a long season.

The Chinese, passing Williams almost at will, was quick to break serve for a 2-1 lead and rolled through the first set, which ended with Williams netting a forehand and hitting a backhand passing shot wide.

Williams won a key game at the start of the second set that went to nine deuces and lasted nearly 12 minutes as the American fended off two break points before finally prevailing with a service winner.

Li blasted an ace, her only one of the match, to level at 3-3. But she produced a double-fault and a forehand error to give Williams a chance to serve out the set. Williams needed three set points to close it out.

It was another double-fault by Li that gave Williams a break of serve at the start of the third and the American never looked behind.

Williams did have to save five break points, the last one with her sixth ace, before wrapping up the title.