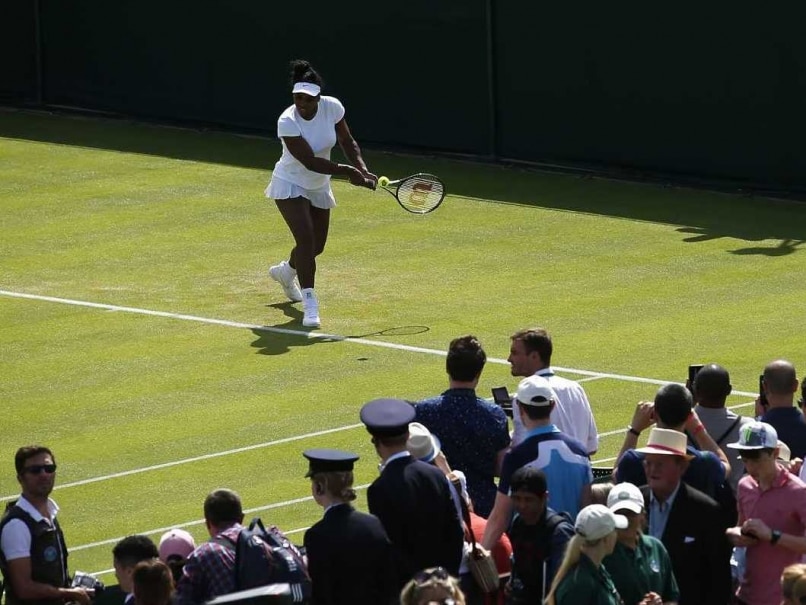 Serena again has a tough road that could, along with the pressure of a calendar grand slam, prove too much© AFP

For almost every top US tennis player, the arrival of the grass court season use to be a welcome return to a cherished surface. Away from the two months' grind on slow red (and occasionally green) clay, grass ushered in a chance for most Americans to return to a surface that favored their aggressive, big offensive games. (First Serve for English Wine at Wimbledon)

Since the start of the Open era in 1968, the likes of Arhtur Ashe, Jimmy Connors, John McEnroe and Pete Sampras have made America the most successful country on the men's side at Wimbledon with 15 championships. The domination on the women's side has been even more marked, with 27 titles in the Open era, registered mostly by Martina Navratilova, Billie Jean King and the Williams sisters. Add on those years before 1968 for the American women, and that number of trophies would double. And those staggering statistics don't even include the number of finalists and semi-finalists who have been represented by the red, white and blue at SW19. (Nadal, Ferrer Lead Spanish Revolt Against Chaotic Federation Head)

But in the 21st century at Wimbledon, American domination has become American futility. Only Venus and Serena Williams have won a singles title since Sampras and Lindsay Davenport hoisted the trophies in 1999. Indeed, Sampras's seventh and final title at his favorite tournament was the last year an American man won the title. Andy Roddick came closest to ending the drought, only to be denied by Roger Federer all four times, three of those defeats coming in finals. His last final on Centre Court against the Swiss legend proved to be the most agonizing, losing the 2009 edition 16-14 in the fifth set.

Since then, only one American man (Mardy Fish in 2011, who lost to Rafael Nadal in four sets) has reached the quarter-finals. Although the women have done much better, it has been one player in particular who has carried the load: the incomparable Serena Williams. In the last five years, only two other American women (Venus Williams and Sloane Stephens) have reached the last eight. (Djokovic, Serena Star on Wimbledon First Day)

The Americans' lack of dominance on grass now is a microcosm of US weakness, sans Serena, in singles tennis elsewhere. For another year, no American man is close to even being a dark horse for the Wimbledon title: it's a distinct possibility they will all fall before the first week is out. It wouldn't be an aberration either: just two years ago , no US man reached the third round. That was the the first time it had happened in 101 years. Although that nadir should not repeat itself this year, and the United States has a good collection of teenage junior prospects waiting to burst onto the senior scene, the fortunes of the American men are unlikely to improve this Wimbledon.

The outlook for the American women, however, is a different story. It helps when you have arguably the greatest female tennis player ever on course to win a calendar grand slam. But it also helps that the depth of the women's side goes beyond the world No1, with still dangerous veterans (such as Venus) and burgeoning young talents on the scene.

Despite all those clear positives, the American women themselves are coming off their worst Wimbledon ever in the Open era - and since 1913 - as none of them reached the last 16 in 2014

Those embarrassing and humbling results are simply not acceptable given America's history on grass. There are some promising signs but with several American men still looking for their first win at Wimbledon, Serena failing to reach the quarter-finals the last two years, Venus's advancing years and Querrey's tough draw, American tennis will have to earn its stripes on grass.

The main US contenders in the men's draw

John Isner (No17 seed): Isner's epic battle with Nicolas Mahut has been his most memorable moment on grass, and he has never gone past the third round at SW19. Wimbledon's low bounce hampers the 6ft 10in Isner's game, despite his big serve.

Thankfully for the Georgia Bulldog alum, he has a favorable draw that could see him make his first fourth-round appearance at The Championships. Go Soeda, Blaz Rola or Matthew Ebden are far from the toughest roadblocks on the way to a possible third-round showdown with the US Open champion Marin Cilic. The Australian Ebden is capable of an upset on grass, but Isner has a real shot at having his best Wimbledon. He again comes in as the best American male hope of success.

Jack Sock (No30 seed): Fears have rapidly quelled over the last few months as to whether the big hitting 22-year-old would ever show off his top 20 potential consistently. With a lack of fitness behind him, Sock is now playing the best tennis of his short career. He won his first ATP title in Houston back a few months ago and followed it up with his best performance at a grand slam, a fourth round showing at Roland Garros where he took a set off Rafa Nadal.

Related: Jack Sock, the great hope of US men's tennis? 'You don't really dwell on it'

But grass is unlikely to favor Sock. With his long take-back on his explosive forehand and his backhand still a work in progress, Sock has only reached the second round at Wimbledon. Sock has a tough opponent in the first round: another ball belter, the dangerous, big serving Australian Sam Groth. And even if he gets by that, Federer looms in the third round.

Sam Querrey: Speaking of Federer, even closer to the seven-time Wimbledon winner than Sock is the gangly 6ft 6in Californian, who could face him in the second round. Encouraging at least for Querrey is that he is back to his best form, having reached the final in Nottingham before losing in two tiebreaks to Denis Istomin. When he gets on a roll, few bring as many aces and dominant holds as Querrey. But the 27-year-old's mentality has always been a problem. His laidback SoCal personality has held him back from winning more than seven titles or having a higher career ranking than 17. Unlike Isner and Sock, he has reached the fourth round at Wimbledon, but will need his best effort ever to repeat that result this year. However, he is still very dangerous to anybody at his best, and that includes Federer.

The main US contenders in the women's draw

Serena Williams (No1 seed): In case anyone had forgotten, the now 20-time grand slam singles champion almost didn't win at Roland Garros this year. She had a difficult draw in Paris with both Victoria Azarenka and Sloane Stephens before the quarter-finals. She came back from a set and a break down to win those epic encounters (she of course had major adversity in the semi-finals and finals against Timea Bacsinszky and Lucie Safarova as well). Serena again has a tough road that could, along with the pressure of a calendar grand slam, prove too much. The opener against little known 20-year-old Russian Margarita Gasparyan could be tricky. Talented youngsters Timea Babos and Heather Watson, along with Daniela Hantuchova and Dominika Cibulkova are in her round of 32 section. And even if she gets past that, players such as Venus and Azarenka, once again, lie in her path before the semi-finals.

Venus Williams (No16 seed): Due to the inconsistencies of Madison Keys and Sloane Stephens, the elder Williams sister continues to be the second-highest ranked American woman. After a promising start to the year with quarter-final appearances at the Australian and Miami Opens, Venus has slowed down. She had a slew of tough draws in the clay court season, leading to defeats to the likes of Azarenka, Simona Halep and Stephens in the first round at Roland Garros. She has a potential last 16 matchup against her sister, but Venus knows that her first-round contest against fellow American Madison Brengle is no guarantee.

Madison Keys (No18 seed): Fresh off of failing to defend her Eastbourne title, questions again surround the talented 20-year-old Illinois native. Coached by 1999 Wimbledon champion Lindsay Davenport, Keys has not followed up her breakthrough Aussie Open semi-final in January as most would have expected, outside of a finals appearance in Charleston. Away from the loaded top half of the draw, Keys has the chance to make her second deep run at a slam. The struggling Eugenie Bouchard (even she is poking fun at her current woes ) is her third round projected matchup and Keys will not be fazed by that, nor a fourth round possible meeting with No8 seed Ekaterina Makarova. And the highest seed in her entire quarter, defending champion Petra Kvitova, is who Keys beat on her final-four run in Melbourne.

Sloane Stephens: For a second consecutive Slam, the enigmatic 22-year-old talent is coming in with good form off a solid warm-up tournament in Eastbourne. But despite a very good semi-final appearance, Stephens still could not earn her first WTA title, as she saw yet another youngster take a maiden trophy before her in Swiss teen Belinda Bencic. No question Stephens is back to being relevant under productive coach Nick Saviano. But her poor clay results and inactivity prior to Strasbourg continue to have her ranking unseeded for slams and unable to avoid potential tough draws against top seeds. That was the case at Roland Garros, where despite showing good form, Stephens could not edge past Serena in the fourth round.

Although she is not due to face Serena until the semis, Stephens has a tough opponent in last year's quarter-finalist Barbara Strycova. Should she get by that encounter against the emotional 27th seed, another talented Czech, in Roland Garros finalist Safarova, looms for her in the third round.

Comments
Topics mentioned in this article
Serena Williams Novak Djokovic Tennis
Get the latest updates on IND vs NZ 2021, check out the Schedule and Live Score . Like us on Facebook or follow us on Twitter for more sports updates. You can also download the NDTV Cricket app for Android or iOS.