Seeded players Francesca Schiavone, Li Na and Shahar Peer were beaten in straights sets in the second round of the Qatar Ladies Open on Wednesday. 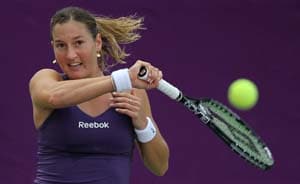 Seeded players Francesca Schiavone, Li Na and Shahar Peer lost in straights sets in the second round of the Qatar Ladies Open on Wednesday.

Third-seeded Schiavone lost 7-5, 6-3 to Peng Shuai of China. Fourth-seeded Li was beaten 6-2, 6-1 by Klara Zakopalova of the Czech Republic, and eighth-seeded Peer went down 6-1, 6-0 to Marion Bartoli of France.

No. 5 Jelena Jankovic was the only seeded player to win so far, defeating Sania Mirza of India 6-0, 6-1. Top-ranked Caroline Wozniacki and No. 2 Vera Zvonareva are scheduled to play later Wednesday.

In another match, Daniela Hantuchova rallied to beat Vera Dushevina of Russia 4-6, 6-2, 6-4.

Peng broke Schiavone twice in each set and will play Bartoli in the quarterfinals.

"Playing against Francesca is always difficult, but I was the better player today," Peng said. "She tested me in the first set, but I was more determined."

"I was not confident. I could not do too great," she said. "For me to go out first round or third round is not the problem. I missed a lot of easy balls. I should take some days off perhaps, but there is no time."

Bartoli had three break points in the only game Peer won.

"Shahar has dominated me in the past, so it was nice to get a win against her," said Bartoli, who improved to 3-7 against the Israeli.

Sixth-seeded Victoria Azarenka and No. 7 Agnieszka Radwanksa were the other seeded players who bowed out of the tournament.

Comments
Topics mentioned in this article
Tennis Roger Federer Shahar Peer Francesca Schiavone Svetlana Kuznetsova Andy Murray Kateryna Bondarenko Caroline Wozniacki Na Li
Get the latest updates on India vs Australia Series, check out the India vs Australia Schedule for 2020-21 and Ind vs Aus live score . Like us on Facebook or follow us on Twitter for more sports updates. You can also download the NDTV Cricket app for Android or iOS.