Sara Errani crushed Barbora Strycova 6-0, 6-2 in the final of the Dubai Tennis Championships to win her ninth career WTA title. 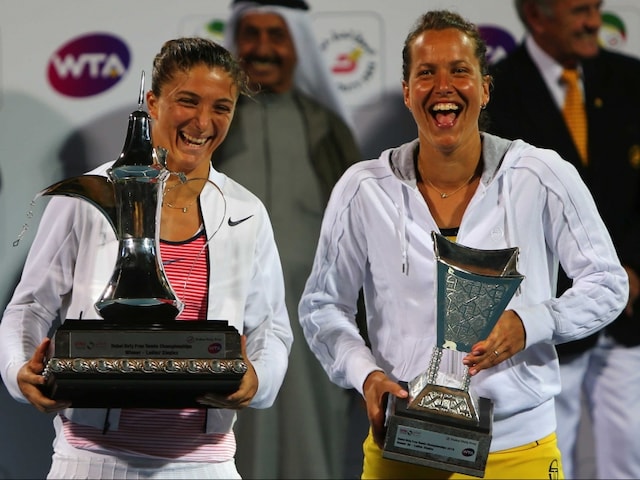 The Italian will rise back into the top 20 as a result of her comprehensive victory in 66 minutes, according to WTA calculations.

Strycova made a stand at the end, saving four match points over the last two games before drilling a forehand out to lose for the sixth time in seven meetings with Errani.

She matched her last title win a year ago in Rio and said that she had seriously considered skipping Dubai to rest.

"I came here thinking maybe I should have rested, just stay home and recover," said the 2012 French Open runner-up.

"But we came here, and every day was really tough, every match from the beginning. There were a lot of tough moments. But of course, to win a tournament, you have to pass a lot of also bad moments.""

Errani ran off the first eight games with Czech Strycova barely getting a look in.

The 29-year-old underdog got a round of applause as she finally broke her duck by winning a game to trail 6-0, 2-1.

But the success was short-lived, with Errani continuing her momentum to reach 5-1.

She was briefly sidetracked as Strycova saved a match point to hold for 2-5.

In the next game, Errani encountered troubles in closing out the win, finally going through to the trophy on her fifth match point as Strycova sent a forehand out.

"I was not so calm at the end, I was trying not to think of all the match points," Errani said. "I was still nervous inside."

Strycova was gracious in defeat: "I tried everything, but it was so hard. I'm very happy to have played the final."

She added: "This was one of the days where you try everything and then nothing is working. The funny thing is that I went on court and I didn't feel really nervous about the match or something different.

"But I tried everything and I couldn't put one ball in. I don't know why, but it's just sometimes how it is in tennis."

Comments
Topics mentioned in this article
Sara Errani Barbora Zahlavova Strycova Tennis
Get the latest Cricket news, check out the India cricket schedule, Cricket live score . Like us on Facebook or follow us on Twitter for more sports updates. You can also download the NDTV Cricket app for Android or iOS.