Italy's Sara Errani had to fight it out against Madison Brengle 4-6, 6-1, 6-4 to set up semi-final clash against Caroline Garcia. 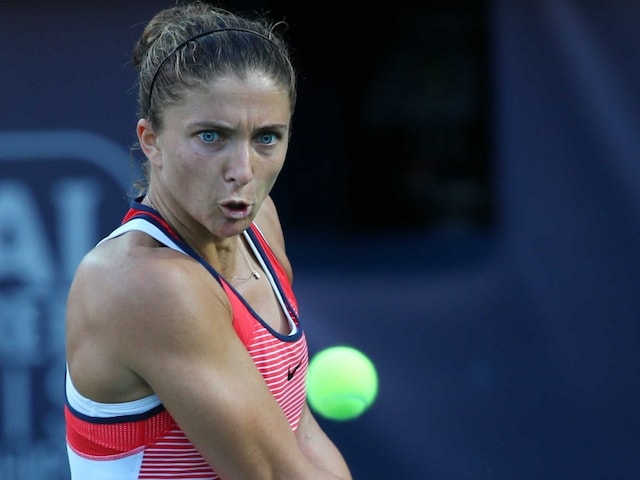 Italy's Sara Errani returns the ball to Madison Brengle of the USA during their quarter-final WTA game of the Dubai Duty Free Tennis Championships.© AFP
Dubai:

Sara Errani struggled through a match littered with 39 break point chances to post a difficult 4-6, 6-1, 6-4 defeat of Madison Brengle on Thursday for a place in semi-finals of the Dubai Tennis Championships. (Read More in Tennis)

The Italian who played the 2013 final in Dubai against Petra Kvitova will on Friday face off against Caroline Garcia after the 38th-ranked Frenchwoman beat Germany's Andrea Petkovic 6-3, 6-4.

The top seeds had already crashed, the first time in WTA or ATP history that all eight seeds did not win a single match.

The 22nd-ranked Errani is the only player left who has ever made an impression in Dubai, with the remainder of the field all newcomers to potential success at the Aviation Club.

"She did not miss a ball," Errani said. "It's not easy to play against her. In the beginning there was a lot of wind."

Errani fought from 1-4 down in the final set after starting off poorly by dropping the first to number 60 Brengle.

The Italian converted on ten of 22 break points while American Brengle converted seven of 17.

"It was difficult for me to play the ball, I could have lost easily, I just kept fighting.

"Just to be in the semi-final for me is an amazing result. I'll try to play the next match, doing my best."

Garcia recovered after two losses to Petkovic, who is playing this season with a new coaching and fitness team in place.

"You always have to fight and work hard against Andrea, she is big fighter, always trying to come back," Garcia said.

"It was very difficult conditions, very windy. Sometimes it was not very nice tennis, not very rhythmic, but you have to stay focused and, just keep your tactics."

Garcia owns a 4-2 record over Errani, whom she beat this month in Fed Cup play,

In the other two quarter-finals, Ana Ivanovic was facing Barbora Strycova and American CoCo Vandeweghe was taking on Elina Svitolina of the Ukraine.

Comments
Topics mentioned in this article
Sara Errani Petra Kvitova Madison Brengle Caroline Garcia Tennis
Get the latest Cricket news, check out the India cricket schedule, Cricket live score . Like us on Facebook or follow us on Twitter for more sports updates. You can also download the NDTV Cricket app for Android or iOS.