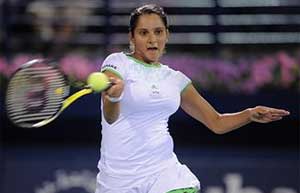 It was Sania's third doubles title this year and 12th overall. It took Sania and Shvedova 65 minutes to close the match.

Sania teamed up with Shvedova after her regular partner Elena Vesnina decided to take the week off.

"It feels great to win my first tournament this year. I hope there will be lots coming," Shvedova said. "Sania asked me to play this week because Elena took the week off. So did Vani (Vania King), so neither of us had our usual partners... We had fun playing together. It worked out well this week!"

Sania is now headed to San Diego where she will be partnering Vesnina.

"Won the tournament:) en-route to San diego... one of the prettiest places in the world, can't wait to see my aunt who lives there:)," Sania tweeted.

Comments
Topics mentioned in this article
Tennis Yaroslava Shvedova Virginie Razzano Nadia Petrova Shahar Peer Elena Baltacha Sania Mirza
Get the latest updates on ICC Women's Cricket World Cup 2022 and IPL 2022, check out the Schedule , Live Score and IPL Points Table. Like us on Facebook or follow us on Twitter for more sports updates. You can also download the NDTV Cricket app for Android or iOS.