Sania Mirza returned to her home in Hyderabad and was greeted by hundreds of fans who celebrated her recent triumph in Singapore. 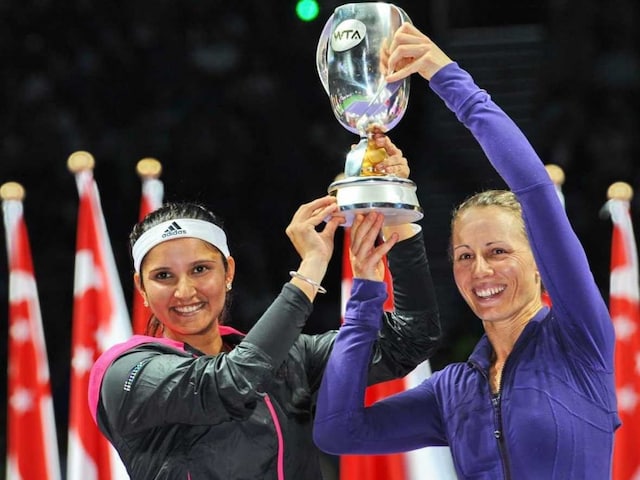 Sania Mirza and Cara Black pose with their trophy after winning the WTA year-end Championships.© AFP

Sania Mirza was received warmly by her fans in Hyderabad after the ace tennis star's historic WTA finals triumph with Cara Black. Sania and Zimbabwean Black beat the Taipei-Chinese pairing of Su-Wei Hsieh and Shuai Peng in straight sets in Singapore on Sunday afternoon and the ace tennis player dedicated her win to India.

This was the last time Sania was playing with Black. It was the perfect way to end the season by winning the prestigious WTA year-end meet in only their maiden appearance. Interestingly, Sania will partner Su-Wei Hsieh from the coming season. (Also read: Narendra Modi congratulates Sania for WTA finals triumph)

"This title is for India, my country," an emotional Sania Mirza told Times of India after her win in Singapore, which has hosted the marquee final WTA event of the year for the first time.

Sania's mother, Nasima has been her pillar of strength ever since she started playing tennis and the player had strong words of respect for her. Sania also thanked Telangana, a relatively new Indian state, which has provided her with all the support and encouragement ever since its inception after separating from Andhra Pradesh.

"I've always had great support from my family, my parents in particular. My mother (Nasima), who is here with me, has been my lucky charm. My state Telangana has also been very supportive. There are so many emotions going through me right now, it's an amazing feeling and I'm truly grateful," said Sania, who consciously took the decision to stop playing singles a few years ago, to concentrate on her doubles career.

The fact that Sania and Black won 12 straight games in the final against their second-seeded opponents, who were also the defending champions, made the win even more special.

Sania also became the first Indian player to win a season finale in almost 40 years. Apart from her, the only other Indian to achieve this feat was Vijay Amritraj, who won the men's doubles event in the ATP finals in 1977 partnering American Dick Stockton.

"It's a very special feeling, to be the first Indian in such a long time," Sania said.

"Given that our country has produced a number of great players -- Mahesh Bhupathi, Leander Paes, Vijay and Anand Amritraj, Ramesh and Ramanathan Krishnan -- this achievement means a lot."

Sania may not have won a Grand Slam with the 35-year-old Black but a win in the WTA finals was also a huge achievement, according to the Indian.

"To finish on a high with Cara is fantastic. We started our partnership with victories in Tokyo and Beijing (late last year), and we're finishing the same way." Sania added.

"This tournament is tougher than a Grand Slam because you are up against the eight best teams in the world. In a Grand Slam, you have a chance to play yourself in and you are guaranteed of not meeting a top team until the quarters."

Playing in her first WTA finals event, Sania had thought she was in good form coming into the tournament.

"Mentally and emotionally, I was just where I needed to be coming into this tournament. I was really charged up, excited to be in my first season-ending event. Physically, I have been better, but that's an athlete's lot and you deal with it the best you can. I have some time off now. It's very, very special to be able to sign off the season with a win in the biggest tournament in our calendar," said Sania, who enjoys superstar-like fame as a sporting athlete in India.

A mixed doubles crown at the US Open, a gold and a bronze medal at the Asian Games and a doubles title in Japan, Sania's late-season run has been something to notice even for veteran players of the sport.

The WTA finals win with Black on what could possibly be the pair's last appearance together at any tournament, comes as a big cherry at the top of all the success and adulation for the beaming Indian.

Comments
Topics mentioned in this article
Sania Mirza Cara Black Su-Wei Hsieh Shuai Peng Tennis
Get the latest Cricket news, check out the India cricket schedule, Cricket live score . Like us on Facebook or follow us on Twitter for more sports updates. You can also download the NDTV Cricket app for Android or iOS.