Playing their third final of the season, the unseeded Indo-American pair lost 4-6 5-7 in one hour and 33 minutes to the local favourites, who were unseeded wild card entrants. 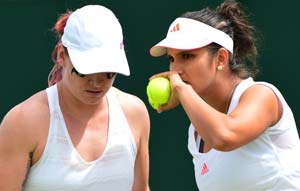 Sania Mirza and Bethanie Mattek-Sands will have to wait for their third title of the season as they ended runners-up at the WTA Porsche Tennis Grand Prix after losing the summit clash to Sabine Lisicki and Mona Barthel, here on Sunday.

Playing their third final of the season, the unseeded Indo-American pair lost 4-6 5-7 in one hour and 33 minutes to the local favourites, who were unseeded wild card entrants.

Sania and Bethanie had won Brisbane and Dubai events early in the year.

With this result, Sania and Bethanie earned 320 ranking points each and split euro 17,046 as prize money.

Sania and Bethanie had their chances in the match as they earned four break chances in the opening set but could convert none. They saved two chances but one break of serve was enough to hand advantage to their rivals.

In the second set they trailed 1-3 and had the chance to level the scores in the sixth game but they squandered their fifth chance of the set to allow the Germans go ahead 4-2.

Finally, they succeeded in converting one break chance and made it 4-4, raising hopes of a turn around.

With two holds, it was 5-5 but Mona and Sabine came from nowhere to get a break in the 11th game and served out the match in the next game.

Comments
Topics mentioned in this article
Tennis Mona Barthel Sania Mirza Bethanie Mattek-Sands
Get the latest updates on India vs Australia and check out  Schedule, Results and Live Score. Like us on Facebook or follow us on Twitter for more sports updates. You can also download the NDTV Cricket app for Android or iOS.