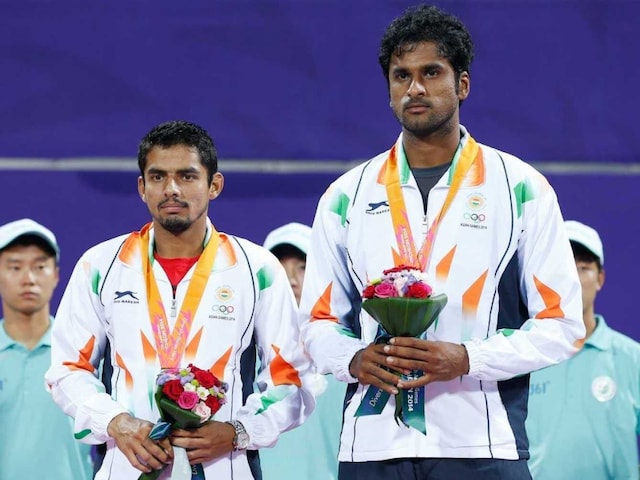 Sanam Singh (left) and Saketh Myneni are two of the top Indians to compete at the AirAsia Open in Bengaluru.© AP
Bengaluru:

Somdev Devvarman and Saketh Myneni, won their respective matches to storm into the second round of the event at the KSLTA courts here.

Singh, ranked 279, won the first set, but shunted out his opponent in 20 minutes in the second set, winning it 6-0.

Singh smashed five aces on his way to break Gigounon thrice in the deciding set, before pocketing the match.

Somdev, in the first set, faced some anxious moments, but overcame them by winning 6-4, before clinching the match against Austrian Maximillian Neuchrist, winning the second set 6-3.

Having not enjoyed the best of years on the circuit, Somdev said, "It has been a tough year. I have been working hard and have been staying fit. I have had a lot of close contests and have lost more than I have won this year."

When asked whether he felt there was a problem with his game, Somdev said, "I have won two Challenger events this year. In the past I have won one. The level of tennis is there. I have struggled to get past the first round in most of the events. I take time to settle down and when I am in the quarters or semis, I begin playing well. Now that I have gone past the first round here, I hope things fall in place and I get going."

In doubles competition, the third seed pair of Dane Propoggia (Aus) and Ti Chen (Tpe) along with Spanish fourth seeds Adrian Menendez-Maceiras and Gerard Granollers moved into the quarter-finals with comfortable victories.

Comments
Topics mentioned in this article
Sanam Singh Tennis
Get the latest Cricket news, check out the India cricket schedule, Cricket live score . Like us on Facebook or follow us on Twitter for more sports updates. You can also download the NDTV Cricket app for Android or iOS.