Sam Querrey of the United States won the Farmers Classic for the third time in four years, downing Lithuania's Ricardas Berankis 6-0, 6-2 on Sunday at the Los Angeles Tennis Center. 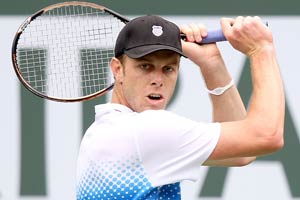 Sam Querrey of the United States won the Farmers Classic for the third time in four years, downing Lithuania's Ricardas Berankis 6-0, 6-2 on Sunday at the Los Angeles Tennis Center.

The second-seeded Querrey has won 13 straight matches in the event. He won the tournament in 2009 and 2010, then missed the event missed last year because of a right elbow injury.

"I feel like I've always played well here and it all came together this week and especially today," Querrey said. "I was just trying to focus on my game, my serve and forehand, and see if he could beat that.

The final was shortest on the ATP Tour at 51 minutes and 14 games. Querrey also broke the tournament record for fewest games lost of three set by Jimmy Connors against Mel Purcell in 1982.

"I did a really good job of focusing on all the big points, all the break points on his serve and mine," Querrey said. "I came up with some big serves and some good forehands, just kept my foot down on the pedal and played solid on the break points that I faced."

Berankis, from Lithuania, was making his first appearance in an ATP Tour final.

"I was nervous in the first set, that's for sure. I didn't play as I would like to play," Berankis said. "In the second set, a couple of games, here and there, I loosened up a little bit. The crowd helped me. The crowd was great and I really enjoyed it. I was trying to stay focused and trying to do my best."

The first set was over in 18 minutes, with Querrey having won 24 of 33 points while Berankis had trouble keeping the ball on the court. And 13 minutes later Querrey, was up 3-0 in the second set.